Discover the training and diet that allows James Harrison to maintain his mass and strength years after retiring from the NFL. 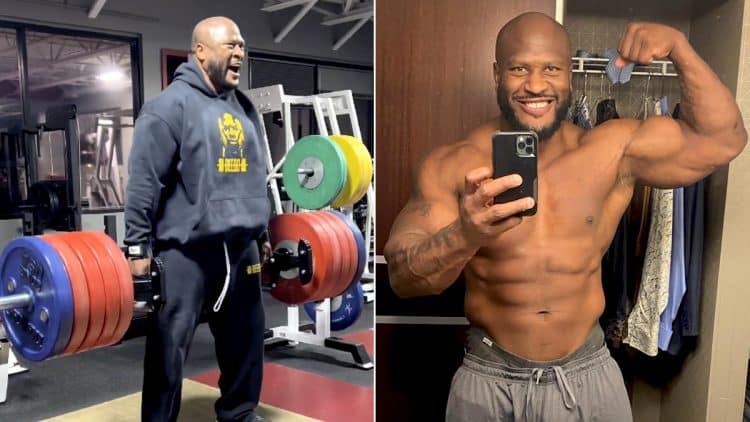 James Harrison is a former NFL outside linebacker. He was one of the most powerful, massive, and talented NFL players in his prime. YouTube clips of Harrison lifting monstrous weights have previously gone viral. He has also made headlines for his massive and muscular frame. There’s no doubt that James has the genetic structure of a beast, but that doesn’t mean he hasn’t worked his butt off to achieve his physique.

In this article, we provide a detailed breakdown of the training, nutrition, and supplement routine James follows to maintain his body and become ever more powerful as he ages.

James Henry Harrison Jr. was born on May 4, 1978, in Akron, OH. He is the youngest of 14 children. As a youngster, Harrison showed talent in little league baseball and was selected for the 1991 All-Star team. However, he soon fell in love with football and the Cleveland Browns. His mother was against him playing, but he did anyway.

James’ natural football talent became evident immediately. He showed skill as a running back and a linebacker. At the same time that he was developing his football skills, James also competed in track and field events.

James graduated from Coventry High School in 1998. In his final year, Harrison was a troublemaker and neglected his grades. He was suspended twice for challenging an assistant coach to a fight. Off-field antics like these led several colleges to rescind their scholarship offers.

James ended up at Kent State University but had to sit out his freshman football year because his grades were not good enough. He went on to have a stellar year in 2001, with 98 tackles and 15 sacks.

James was not drafted into the NFL in 2002, with most clubs considering him too short for a linebacker. However, he was picked up by the Pittsburgh Steelers as an undrafted rookie. The seasons were less than ideal, with team-mate James Farrior saying:

“He was a knucklehead that didn’t know the plays. We’d be in practice, in training camp, and he might not know what he was doing so he’d just stop and throw his hands up and tell (the coaches) to get him out of there. We thought the guy was crazy.”

In 2003, James signed with the Baltimore Ravens. He returned to the Steelers in 2004, showing great progress in his skill and attitude. He remained with the team until 2012. The Steelers won the Superbowl in 2005-2006. The following year, James was voted season MVP. In 2008, he led the Steelers to a second NFL title.

According to Garrett Giemont, the conditioning coach of the Pittsburgh Steelers, Harrison was the hardest athlete on the team. He was also, according to Giemont, the strongest player in the entire NFL.

James’ workouts have been widely shared on YouTube and Instagram. Those videos give a glimpse of the intensity and amount of poundage he regularly heaves. Harrison works out six days a week and emphasizes powerlifting-type exercises. His workouts take place between 7 am and 5 pm and last for about an hour.

James constantly pushes himself to lift heavier weights in the gym. He also uses negative emphasis training, where he takes 5-6 seconds to lower the bar on every rep.

James uses a split routine that sees him training one or two body parts per day. Here is the split that he follows:

Let’s now break down the work day by day:

James follows a low-carb, high-protein diet to fuel his workouts and maintain his muscle mass. He eats only organic foods and avoids dairy products, gluten, white sugar, and caffeine.

James limits his alcohol intake and stays away from processed foods. Instead, he chooses high-protein and fiber-rich foods that contain plenty of healthy fats. Here are ten of his go-to foods:

Here is what a typical day’s eating looks like for James Harrison:

James supplements his diet with three key products to fortify his body and meet his daily macro and micronutrient needs to excel at the highest level.

James usually has a whey isolate protein shake within an hour of his workout to promote protein synthesis.

Harrison takes a daily multivitamin to ensure he gets the RDA of every vitamin his body needs to be at its best.

Although now retired from the NFL, Harrison brings the same intensity to his workouts as he did in his prime. The intensity combined with the grueling workout schedule detailed in this article allows him to retain the strength and muscle mass from his younger years. Give James’ workout a try if you think you can handle it!

How To Do The Pretzel Stretch – Tips, Benefits, and Alternatives