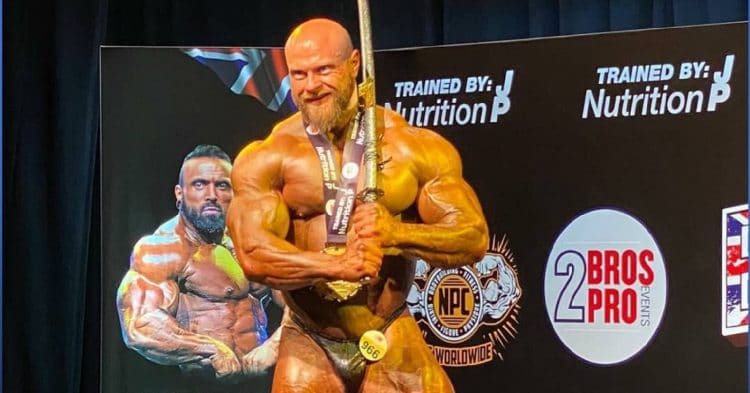 With a ton of talk about the Mr. Olympia it is easy for the 2020 IFBB British Grand Prix to have been overlooked. However the show ended up delivering some pretty entertaining bodybuilding action, with some interesting results.

The plan was originally that the British Grand Prix would actually take place this weekend. However due to a plan for increased social restriction in Great Britain, the decision was made to move the contest up to Wednesday, November 4th instead. This resulted in a bit of a lowered excitement for this show that is normally very exciting to watch. Nevertheless there were still some pretty exciting athletes who had prepared for the show and took the stage Wednesday morning.

These are the results of the 2020 IFBB British Grand Prix:

Per usual, most of the attention heading into the British Grand Prix was in the Men’s Open division. After barely missing the qualifications for the 2020 Mr. Olympia, Regan Grimes hoped to rebound in a big way here. In the end however James Hollingshead would be the one to win the division, despite Grimes being much improved, with the Englishman winning his second Pro Show in a row. This allowed James to punch his ticket to the 2021 Mr. Olympia, as well as this year’s event which he was already qualified for.

Here are the top five for the Men’s Open:

Before the Men’s Open competitiors took the stage, it was revealed that this award was going to be named after the late Luke Sandoe. Following his win, Hollingshead gave a speech paying respect to the fallen bodybuilder.

“I don’t want people to forget Luke, and today is about honoring him,” James said. “(We need) to keep hosting this event, and keep honoring him and keep his name and memory alive. That’s the most important thing, regardless of who wins.”

Below is the Men’s Open scorecard:

The 212 Division if the British Grand Prix was also rather exciting and filled with elite talents. In the end, Angel Calderon would use size and expert conditioning to end the day on top, also his place at the 2021 Olympia. However there were tremendous performances all the way down the scorecards.

Here are the top five for the 212 Division:

Here is the scorecard for the 212 Division:

The Classic Physique division featured a ton of up and coming European athletes, looking to make a name for themselves with a win at the British Grand Prix. There was a lot of good things seem from various athletes but in the end, Kiraly Laszlo was victorious, securing his place at the 2020 Olympia.

Here are the top five for Classic Physique:

Below are the scorecards for Classic Physique:

On the women’s side of things, the Bikini Division was unsurprisingly the most stacked division at the British Grand Prix. Twelve women took the stage to put their physiques to the test. By the end of it, Stine Hansen was crowned the winner, earning her spot at the Olympia in 2021.

Here are the top five for the Bikini Division:

Below are the scorecards for the Bikini Division:

Although the Women’s Physique division was the most shallow at the British Grand Prix, does not mean that these three ladies did not bring it. Ultimately it was Lenka Ferencukova who brought enough to the stage to leave as champion, and with an invite to the 2021 Olympia.

Here are the top five for the Women’s Physique:

Below are the scorecards for Women’s Physique:

Congratulations to all the competitiors at the 2020 IFBB British Grand Prix. It was good to see this show in honor of Luke Sandoe.