Bodybuilding legend Jay Cutler seems to believe Brian Shaw could have a bright future in bodybuilding. 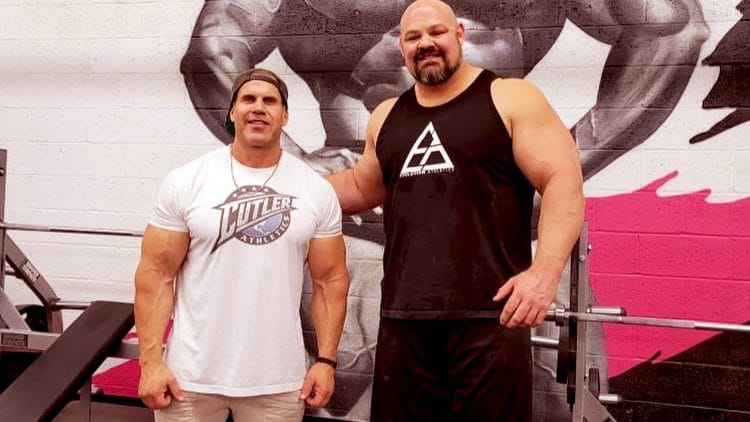 Jay Cutler can say with confidence that 4x Strongman Brian Shaw could take his services to the world of bodybuilding. A legend in his own right, Jay Cutler knows a thing or two about bodybuilding potential. Jay Cutler believes Brian Shaw has the tools to transition effectively into bodybuilding.

During his bodybuilding tenure, Jay Cutler dominated with his aesthetic physique and set many benchmarks that bodybuilders aspire to reach today. Winning the Superbowl of bodybuilding competitions four times is nothing to scoff at. As notable figures in bodybuilding and strength sports, Jay Cutler and Brian Shaw met up for arm day and got a good bicep workout in.

After getting to hang out with Brian Shaw, Jay Cutler believes Shaw has true potential as a bodybuilder. Cutler asserts that Shaw has leaned down lately, and is confident his endurance would be a key element if he ever makes the transition.

In episode 15 of Cutler Cast, Jay Cutler discusses Brian Shaw’s current weight and some of the strengths Shaw might have over the pool of competing bodybuilders. When asked bluntly if Brian Shaw could compete as a bodybuilder, Cutler didn’t mince words.

He definitely said, that you know his endurance and his mobility is better at a lower weight, so I think he competes around 400(lbs). Right, at the World’s Strongest?” Cutler said.

Cutler is confident that Shaw’s physical abilities would help him if he ever were to transition into bodybuilding. Given the amount of muscle mass Brian Shaw has already, the transition could be a relative one. Shaw has experience with various diets for maximizing performance which also serve as useful tools when exploring bodybuilding.

“But I think now, you know, they’re making it a little more difficult for these guys. You know it seems like if someone is great at something, they pull that obstacle out, right? So I think he could do it. I think if, he got on– it would probably take him a year to do the transition.

Absolutely. Cutler continued. I think anyone, no matter what, he’s got a lot of muscle behind him a lot of density behind him and I think he could do very well.”

Jay Cutler believes Shaw might be met with some resistance if he changes disciplines. While Brian Shaw enjoys his recovery phase from a hamstring injury sustained at the 2021 Rogue Invitational, it appears he is still making headlines. Jay Cutler seems convinced Brian Shaw could make a real impact in bodybuilding and would even serve as his coach.

Push Press vs. Overhead Press – Which one should you do?