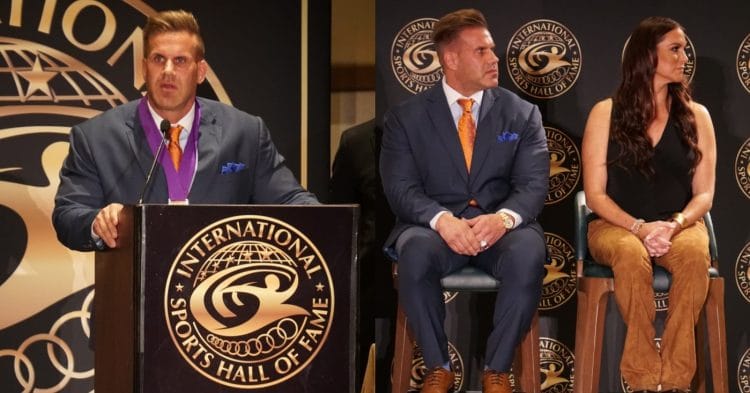 The 2021 Mr. Olympia is underway, taking place from October 7th-10th, in Orlando, Florida. One part of the festivities on Saturday morning saw four-time Mr. Olympia champion Jay Cutler inducted into the International Sports Hall of Fame.

Cutler is one of the most influential bodybuilders in the sport’s history, and not just because of his reign of four titles at the Olympia, and six other second place scores. Even after retiring, Jay has continued on to be an amazing ambassador for the sport, and role model for the current crop of top talents within the sport.

So it seemed like the right call when it was revealed that he would be a part of the 2021 class of athletes inducted into the International Sports Hall of Fame. This is an honor extended by Robert Goldman to honor the world’s greatest athletes from all sports categories, because of their sporting achievements as well as their charitable contributions and efforts.

Jay Cutler joined a lineup of six athlete, all of which coming from a variety of sports, ranging from WWE pro wrestling, football, fencing, and martial arts, as well as his bodybuilding. The ceremony took place during the final day of competition for the 2021 Olympia, and RxMuscle was on scene to catch a photo of Jay accepting his award, posting it to Instagram.

During his induction speech, Jay apparently gave a speech that opened up about his time in bodybuilding, and how it opened the door for him to be successful in other life ventures. He also explained how people like Ronnie Coleman and Joe Weider helped to motivate and push him to winning those title and performing at his best.

Of course, Jay Cutler was not alone on stage in this presentation. Joining him was a list of athletes including Peter Westbrook, Marcus Allen, Stephanie McMahon, Billy Blanks, and Ernie Reyes Sr., with Jay being seen sitting next to the WWE’s McMahon.

Even with the variety of bodybuilders who would be worth giving this honor to, based on their accomplishments and how much they have given back to the sport, few are more deserving than Jay Cutler. He has done incredible amounts for the sport, and has helped others reach success in their own lives.

Congratulations are in order to Jay for this massive honor, as he joins some lofty company. It was good to see him rewarded for the hard work that he has done over the years.