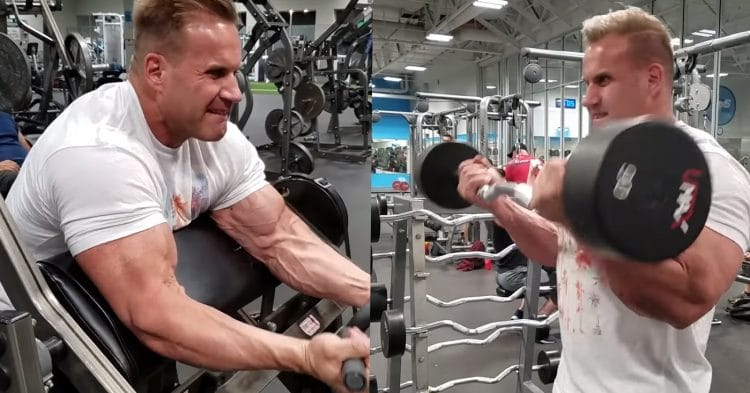 In his prime, Jay Cutler was able to win the Mr. Olympia, in part due to his enormous arms. He has a killer arm workout that you can try, which only takes 30 minutes, but will give you the pump you need.

With four wins at the Olympia and six second place performances as well, it is safe to say that Cutler was a pretty good bodybuilder back in the day. With more than 20 years of competitive experience, he proved himself to be elite time and time again.

Even when he retired in 2013, Jay was still considered one of the best in the world. Since his retirement, he has gone on to be an ambassador for the sport, while maintaining his impressive physique.

One of the main things that got people talking about Jay Cutler, was his enormous arms. That was one of his trademarks during his time at the top, with few being able to match his massive pythons.

However Jay knows that sometimes time is short, and one is limited on what they can do in the gym. So he cultivated a killer 30-minute workout that gets your arms pumping when you’re short on time, uploading the process to YouTube.

“I always do bi’s and tries together, and the reason I do that is because I get a much better pump when I do my triceps first…

“I prioritize training arms together so I get that pump in one side, and it’s so much easier to pump the other side. It’s the same thing with the quads and hamstrings, that’s how I do that.”

After the workout Jay Cutler explained that he was on a tight schedule for that day, and that this workout gets him pumped. It is not enough to build, but it is great to maintain the arms when you are in a rush.

Of course, it is always better to take your time to really focus on your work in the gym. That said, this is a great way to stimulate both the biceps and the triceps, when time is a factor in your training.