The 4x Mr. Olympia Jay Cutler shows us what he does to build an awesome back! 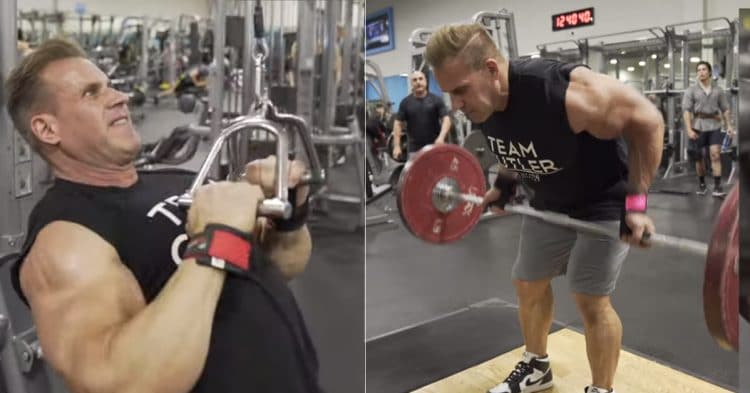 Four-time Mr. Olympia Jay Cutler recently started a transformation series on his YouTube channel JayCutlerTV aside from all his other awesome and informative videos where he features many guests from the fitness industry, shares his very successful endeavors, and even day in his life type content where he shows his training, nutrition, and more.

Cutler mentioned in the first episode that his goal for the transformation was to get leaner and a little more rounder (muscles). He then did a chest workout which you can see on his channel. But the second and most recent episode featured one of his best back workouts where he shared his top back-building exercises.

So, the episode started off with him testing a new ‘sour series’ of supplements with his girl friend by throwing sour candies into some liquid until it was sour enough for him. Then on the way to the gym, he briefly mentioned the great real estate opportunities in Las Vegas and on to the back workout.

Cutler started with the high row hammer machine which targets the back muscles in general, while placing an emphasis on the lats due to the overhead pull, and he does these two arms at a time.

Next was the hammer pulldown which he does for training the lats and getting more width, followed by the seated cable row using a close grip. And then he moved over to the barbell bent-over row using a reverse grip which he says really engages the lower lats.

He also did the single-arm dumbbell bent-over row and lastly, the Hammer Row which he did one arm at a time in a more upright position and really focused on the lats.

Cutler explained that his rest times in between sets are only 45-60 seconds and then he mentioned his last exercise for the workout which was a reverse seated cable pulldown using two single handles to give him a little more of a contraction in the lats.

And that concluded the workout. Cutler explained that he was happy with the workout aside from the gym being a little crowded but all-in-all, it was a productive session.

Be sure to stay tuned for more Jay Cutler content in the near future.

The high-row machine is a popular piece of equipment manufactured by Hammer Strength. You can find videos of top pro...

The 10 Best Middle Back Exercises for Strength, Mass, and Better Posture

Take a look at most bodybuilding back workouts, and you’ll see an abundance of lat pulldown and pull-up exercises. That’s...