Powerlifting legend Jen Thompson competed at the 2021 USA Powerlifting Nationals, where she picked up her 50th victory at the event 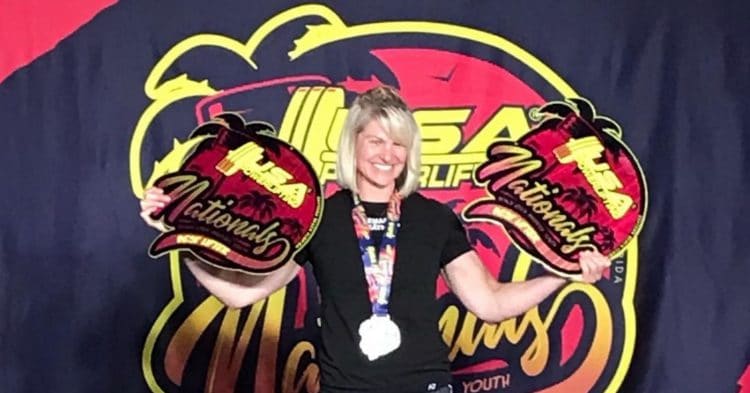 Heading into this week, any powerlifting fan with a bit of knowledge on the sport knows that Jen Thompson is one of the greatest to ever do it. This fact was only amplified after the 2021 USAPL Nationals, where she scored a very special honor.

Thompson competed in the 63kg division of both the women’s Raw Open and the women’s Raw Masters 1 (40-49) Bench Press Only events. Given the fact that she is nearly 48 years old, her ability to compete is unbelievable.

Jen lived up to her reputation for her unbelievable skills on the bench, pressing 125kg (275lb) at a bodyweight that was just under the 63kg limit. This was enough for her to win the Open Division portion of the contest, as well as the Master’s Division, but she was the sole competitor there.

However the lifts themselves were not what was impress about this showing, although they were quite good. Instead, it was the fat that with these wins, Jen Thompson now has 50 victories at the USA Powerlifting Nationals, which includes victories both in overall competition and Bench Only events.

Taking to Instagram, she reflected on this moment, and how much it meant to her. She also wanted to thank her fans and team for their support over the years, as she worked to reach this incredible milestone.

“Yesterday I won my 50th @usapowerlifting National Title (bench & PL). It’s so hard for be to believe I have been in this sport for 22 years,” Thompson wrote.

“It is because I love it.
The Community
The Competition
The Motivation
The Phyique
The Confidence & Self esteem it brings

“Thank you to my family. It is @jenniferthompsonshusband belief in me that has propelled me throughout the years & My boys for their unwavering support,” Thompson added.

“My sponsors @sspnutrition @a7intlwho embody the idea we should not only put out the best products, but GIVE BACK to our sport. And @usapowerlifting who have always been a strong supporter of female lifters and are the most professional organization out there.

The Legacy Of Jen Thompson

There are a lot of accolades that we could mention for Jen Thompson, and the things she has done over the years. Her insane level of accomplishment is proof that her place in the IPF Hall of Fame is well deserved.

In addition to her 50 USAPL Nationals wins, she has 11 IPF world titles under her belt. Truthfully there are only a handful of contests throughout her lengthy 20-year career that she did not come out on top.

At the end of the day, Jen Thompson will go down as one of the greatest to ever do it. This huge accomplishment is just another reason to support that theory.