Ahead Of The 2020 World's Strongest Man, Jerry Pritchett Discusses His Training, Dealing With Setbacks, And Attempting A World Record 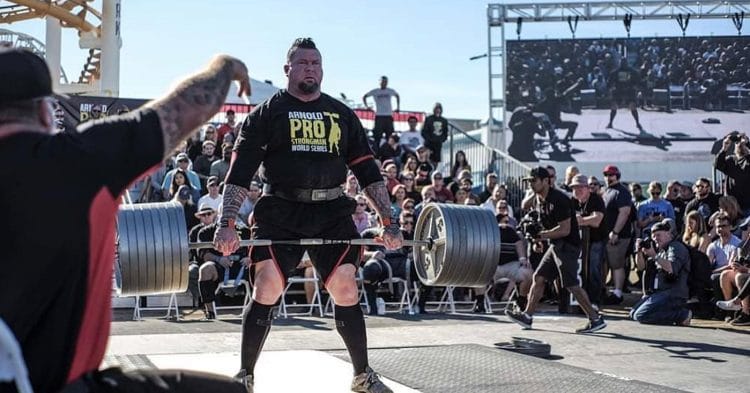 Heading into the 2020 World’s Strongest Man, Jerry Pritchett has put himself into an interesting position. Ahead of the contest, he explains the difficulties he has overcome in training, his expectations for the competition, and more.

With the 2020 WSM upon us, there is a lot of talk about who will win and how the contest will shake out. One name that has been mildly overlooked leading into this contest is Pritchett, despite his respectable record of achievement in strongman. Nevertheless, he has worked hard to prepare for this year’s event and is fired up with motivation to perform better than he ever has.

Training For The World’s Strongest Man

Like most of us, 2020 has hit Jerry Pritchett pretty hard, especially considering his role as an athlete in a world that has made it increasingly more difficult to go to the gym. However, as he explained in an interview with FitnessVolt, Jerry has done a great job adapting. In fact, he feels better than ever leading into the WSM.

“There’s been a lot of challenges with Covid,” Pritchett continued. “Through training it’s actually been a good thing. With competitions going away I could just focus on my training and my gym movements and different events. I can just focus on getting stronger and healthy. A lot of times when you’re doing 8 to 10 shows a year you don’t really get to do that, you’re just kind of moving on to the next show and kind of rehabbing injuries as you go. I had a good chunk of time to get some training in. My lifts are really strong, stronger than they’ve ever been and all around my strongman events and everything are stronger than they’ve ever been, so I feel really good.”

Pritchett goes on to explain about trying to work around the daily struggles of juggling having his kids doing online schooling with training, not to mention other restrictions due to this pandemic. All things considered though, he feels that he has been pretty lucky overall.

Jerry Pritchett Is Expecting The Unexpected

A complicated situation occured as athletes began pouring in for the World’s Strongest Man, with the weather in Bradenton FL being uncertain and putting some events in jeopardy. Jerry Pritchett is used to staying on his toes during his prep, as it is not uncommon for events to change on the fly. So for this year, he is just ready to compete, no matter the events.

“I’m looking forward to kicking this thing off,” Pritchett said. “I’m excited to get it going and I feel like I’m ready for whatever they come up with. I’ll get through this heat and hopefully move on to the finals, and then hopefully be on top of the podium at the end of the final.”

In the time since speaking with Jerry Pritchett, the events for the WSM have been announced. On the one hand, he got what he was wishing for in some ways with the event lineup. On the other, there was one specific thing he was hoping to avoid, but it has ended up being a big part of the contest.

“Obviously, I always like to see deadlifts, yoke, farmer’s, any heavy moving events, log press, any of those would be favorites of mine,” Pritchett explained. “Dumbbell traditionally is not a great event for me, and I haven’t trained it much this go because it wasn’t originally on the list. But once they added it, I threw it in last week and it actually felt pretty good. I don’t know, I feel like I’m ready for (anything).

“Training’s been really rough to get through,” he continued. “I’ve been training six days a week and pushing really hard; harder than I have. So it’s been brutal but at the same time once everything healed up it’s been really good. I feel like I’m in better condition that I’ve been in.”

In the past, Pritchett has dealt with a decent amount of injuries. So with such serious training, he has to be careful to avoid getting hurt again. That being said, he has taken enough precautions to stay safe, and as a result is coming into this event feeling better than he ever has.

“Basically I try to catch stuff early and not let it linger,” Jerry Pritchett said. “I’ve had some really good PTs I’ve been working with, and we just try to work that stuff early before it becomes and injury.

“This is probably the first show in a long time that I’m not coming in with something lingering,” he said. “We all have aches and pains and stuff that bugs, but no injuries persay.”

Who Is The Biggest Adversary For Jerry Pritchett?

Although there are some big names missing from the 2020 World’s Strongest Man roster, a large amount of elite strongman will still compete. Nevertheless Jerry Pritchett does not let this effect his mind state leading into the contest. Instead he focuses on himself, treating everyone with the same level of respect.

This frame of thinking is obviously beneficial for keeping Pritchett focused. But what has he done differently this year in order to get the best performance of his career?

“Just training,” Pritchett responded to that very question. “I’ve trained my ass off for this one. So making sure that I’ve got all the reps in on training and no stone was unturned for this one. I’ve pushed hard through everything in training, (and doing) every event on the list. That’s why I’ve added a day, so it’s been six days a week. So I feel this is the most ready I’ve been going into the World’s.”

One of the biggest names missing from the WSM roster is fan favorite Hafthor Bjornsson, who retired earlier this year. Jerry Pritchett knows that him being missing from this year is a big change from the normal, considering how long he was a mainstay at the contest.

“It’s definetly a big change, you know?” Pritchett said. “He’s been a fixture here for quite a few years, since like 2011 or something like that. He’s been here for a long time so it will be a big change. Then a few of the others that have dropped out as well. It kind of changes the tide sometimes.”

Do not get it twisted though, just because Thor, or others are missing from this year does not make the 2020 World’s Strongest Man any less of a great contest. Pritchett is not interested in hearing any talk about the idea that this year is a leaser form of the contest than usual.

“There’s still 25 elite strongman here,” Pritchett explained. “They aren’t here for no reason so I don’t believe it’s less than (other years). The outcome, the final production here, just what we have for athletes, there’s still some great strongman here. A lot of veterans here, and a lot of new guys that are really strong and pushing to make their mark on strongman. I think it’s going to be a very competitive field.”

Earlier this year we saw Jerry Pritchett attempt to etch his way into history books by going head to head with Rauno Heinla in a contest deadlifting 400kg for as many reps as possible in 75 seconds. While he was not able to come out on top here, he was able to use this as a learning experience. Not only that, but he still has his sights set on more records in the near future.

“I felt like I got some carryover on my top-end deadlift from pushing all those reps because I don’t usually push that many heavy reps,” Pritchett explained. “It’s kind of one thing that I’ve added to my training. I believe it’s helped my deadlift overall, so I guess that’s the biggest thing I’ve taken away from it, was kind of making myself get ready for the World’s with the high end heavy reps like that. It made me push my reps in training, so I believe overall it’s helped my deadlift.

“I plan on taking down the Master’s world record next month, after I turn 40,” he continued. “I’ll be the first man over 40 deadlift over a thousand pounds.”

As exciting as it will be to see Jerry Pritchett accomplish this feat, he must first get through the 2020 World’s Strongest Man. He is fired up and focused, planning to end the week atop the podium. He will have a tough road to get there, but it will be interesting to see how he does.

Stay tuned to FitnessVolt for daily coverage of the 2020 World’s Strongest Man, and more athlete interviews throughout the week.

The Importance of Sleep for Building Muscle and Losing Fat