Strongman Rauno Heinla wins the head-to-head against Konstantine Janashia in the first event as part of season two of the World's Ultimate Strongman Feats of Strength event earlier today. 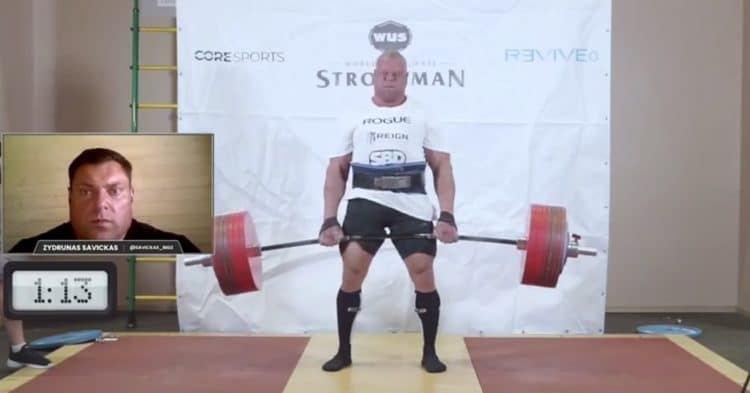 The 2020 World’s Ultimate Strongman competition looked a lot different than years prior due to the global health crisis. This year, the organization announced a Feats of Strength series where top athletes in the sport would attempt to break world records at their own locations.

Season one started off with Hafthor Bjonrsson who broke the all-time deadlift world record (501kg/1104lbs) in the deadlift, and several athletes went on to set records of their own, while others came up short.

A few episodes later (June 2020), Ruano Heinla, Jerry Pritchett, Jean-François Caron, and Konstantine Janashia participated in the 400kg/882lb deadlift for reps of which Heinla came out on top with 5 reps which tied the record held by several other competitors including Janashia.

Each competitor had 75 seconds to complete as many reps as possible, but it was quickly evident that it wouldn’t be possible for any athlete to pump out reps at a consistent rate for the entire duration with the massive 400kg weight.

Well, the World’s Ultimate Strongman Feats of Strength is back with season two, which featured Estonia’s Rauno Heinla and Georgia’s (country) Konstantine Janashia going head-to-head in the 400kg deadlift for reps record attempt. This was the first episode for season two and once again, Laurence Shahlaei and Mark Boyd hosted the showdown while Zydrunas Savickas was the head referee. Both athletes participated remotely from their locations.

The event took place 12 PM EST/5PM GMT and was broadcast by ESPN and livestreamed from CoreSports and Rogue YouTube channels.

The rules were the same, each athlete gets 75 seconds to pump out as many reps as possible.

Heinla was up first where he just ran through five reps before taking a rest to try and go for six, of which he did achieve after a tough last rep.

Janashia was up next. His first rep went up without too much of a struggle although it wasn’t promising for a potential world record performance. After the second rep, it was clear that he was done as it was a bit if a struggle.

Both athletes gave it their best but there could only be one winner and that was Estonia’s Rauno Heinla with 6 repetitions, who also achieved the world record in this event.

Watch the record attempts below (Heinla’s attempt is around the 35:00 mark while Janashia attempted the lift at around 45:40).

A little background on these competitors…

Janashia is a multiple-time Georgia’s Strongest Man champion and his best finish was at the 2016 World’s Strongest Man where he place fourth. At the 2019 WSM which was his fourth appearance, he suffered an injury which no doubt affected his performce today, as he did pull this weight for 5 reps before.

He’s currently preparing for the 2020 World’s Strongest Man and hopefully, he’s able to perform how he wants too.

Heinla is a multiple-time Estonia’s Strongest Man champion. He pulled a massive 450kg/992lbs to win the 2019 World’s Ultimate Deadlift title and is looking to hunt down Hafthor Bjornsson’s 501kg world record and we think that he’ll definitely get it sometime in the near future.

We’ll be sure to keep you up to date on the latest Strongman events and records.

With the 2022 Giants Live World Deadlift Championships approaching rapidly, the participants are slowly reaching their peak shape. It will...

Rauno Heinla recently turned 40 and appears to have gained strength as well. He is now eligible to compete in...