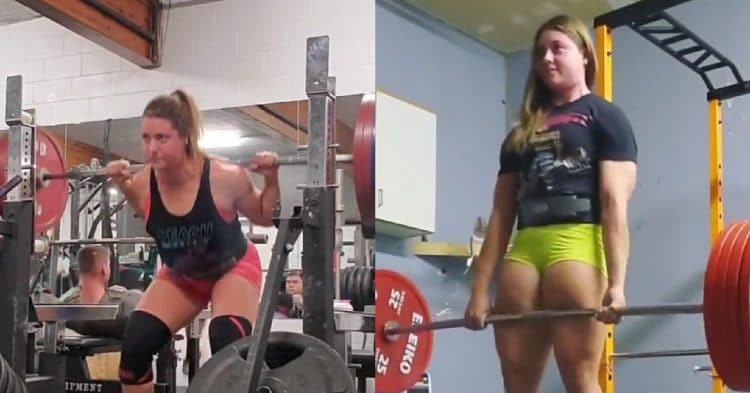 Things have been looking good for Jessica Buettner over the last few weeks. This culminated big time recently, when she had some solid performances in the training room.

It has been a pretty good last few years for the Canadian powerlifter, Buettner. She has really cemented her place as one of the best 72kg lifters in the world, winning multiple championships and setting numerous world records along the way, all by the time she turned 25. Although she planned on having a big 2020, the way things have shapes up in the world left her in a bit of a state of limbo, not competing since the CPU Nationals in March.

She never took time off from training, but it seems that Jessica Buettner is really starting to turn things back up. She had been showing some pretty serious movement in the weight room recently, and that continued with a post to her Instagram. Here she highlighted a paid of impressive sets that she scored throughout the week, landing both a 385lb squat triple, as well as a smooth 485lb deadlift triple, making both sets seem effortless and as smooth as can be.

End of the lean bulk and lifts were feeling good! Really happy with all 3 at the moment, even bench. Accessories have been paying off too, especially the upper body ones 👀💪”

Both the squats and the deadlifts looked clean and technical, as Buettner hit every rep with precision and smoothness. Then she followed that up with a couple of small physique updates. She is certainly showing the results of bulking up lately, and not just with her improved lifts.

It was not just this week that had us raising our eyebrows over Jessica’s performance. Her recap of last week’s gym work saw her hitting a new personal record with the front squats, doing 4 reps at 315lb. Not only that, but she threw in some overhead presses for good measure, and took 419lb for a ride as well.

Jessica Buettner has always been someone fun and exciting to watch in action. However she has been looking unstoppable as of late, and appears to be getting back into a mindset where she is preparing for something. She told FitnessVolt that she plans on competing at the IPF World Championships in November, provided they still happen, and with that in mind she seems to be turning things up a notch to get ready.

How To Do The Cable Shrug