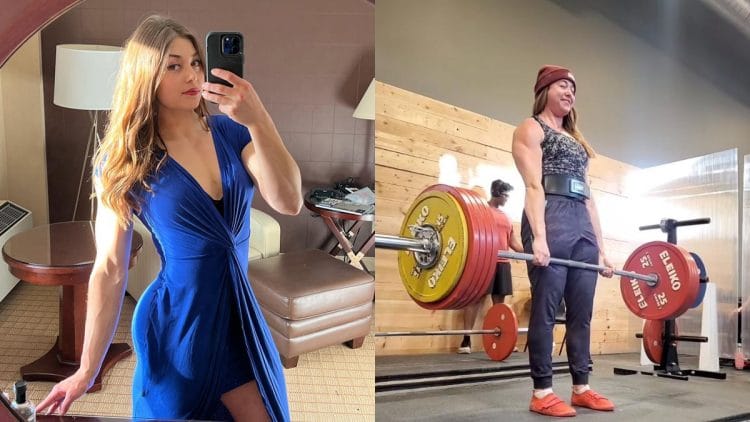 Jessica Buettner is a professional powerlifter from Canada. She currently holds the International Powerlifting Federation (IPF) raw squat, deadlift, and total world records in the 76KG weight class, which she scored at the 2021 IPF World Classic Championships in Halmstad, Sweden.

This is her complete profile, biography, training regime, diet plan, and more.

Born on Jan. 5, 1995, in Prince Albert, Canada, Jessica Buettner was forced into gymnastics by her parents in her early years. However, she soon left gymnastics for soccer.

Jess started as a track and field athlete in university and was a successful pole vaulter and shot put athlete. However, her pole vault career took a big hit when she suffered injuries in a snowboarding accident.

“I used to do track and field on the University team. I was a pole vaulter, and I sprained my ankle really bad doing a dumb snowboard trick, and that pretty much ended my pole vaulting career right there. So I started lifting weights over that summer, and I just really started falling in love with it.”

Buettner discovered her love for weightlifting during her 10-week recovery phase. “The Canadian Forklift” continued her track career after recovering from her injury but was unable to get the same results as she used to before the injury.

“It took quite a long time. I knew that I wanted to continue (powerlifting), but I stayed on the track team for three more years after that, and track was the priority until probably 2017 or 2018,” said Buettner.

The Canadian powerlifter started competing in powerlifting meets while still on her varsity track team. She later switched to competitive powerlifting after realizing her potential in the gym. 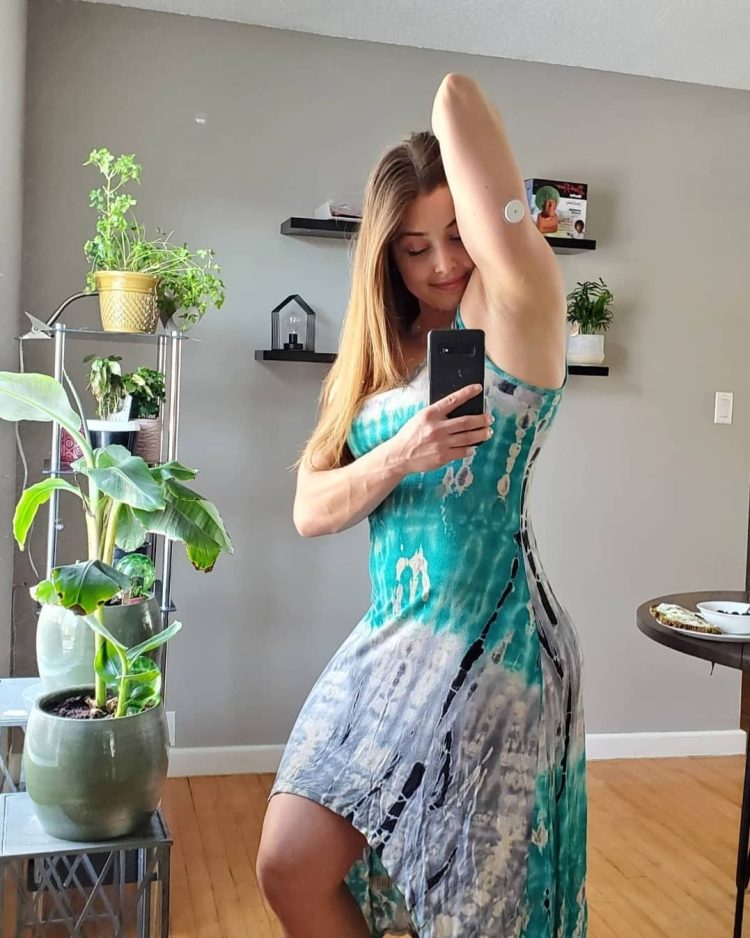 At 11 years old, Jessica Buettner discovered that she had type 1 diabetes. Type 1 diabetes, once known as juvenile diabetes or insulin-dependent diabetes, is a chronic condition in which the pancreas produces little or no insulin.

Although type 1 diabetes usually appears during childhood or adolescence, it can develop in adults. Different factors, including genetics and some viruses, may contribute to type 1 diabetes. Furthermore, like type 2 diabetes, type 1 is uncurable.

Per Jess, she was a chubby kid growing up and weighed around 100 pounds. However, she lost twenty percent of her body weight when she got sick with diabetes. She went front 100 pounds to 80 pounds in a matter of days.

The silver lining is that Buettner got significantly better at athletics after recovering from the illness.

Trivia: The Canadian powerlifter checks her blood sugar levels 8-15 times a day, and the number goes up to 20-30 when she is prepping for a contest.

Also, if you follow “The Canadian Forklift” on Instagram and wonder what the white thing on the back of her arm is in some of her photos, it is FreeStyle Libre — a device she uses to monitor her blood sugar levels.

Check Out: Jessica Buettner Tells What It Takes To Be An Elite Powerlifter With Type 1 Diabetes (Exclusive)

At 27, Buettner is still very early in her powerlifting career. At the time of this article’s publication, she has competed in 18 sanctioned powerlifting meets.

A pharmacist by profession, Buettner has won 16 out of the 18 contests she has competed in and placed second in the remaining two. “The Canadian Forklift” entered her first sanctioned powerlifting meet at 19 years old — 2014 CPU Saskatchewan Provincials. She won the meet with just one attempt on each lift, a feat she has repeated in many contests.

Furthermore, she made her presence known by winning her first International contest — the 2016 IPF World Classic Powerlifting Championships (Juniors). In 2017, Buettner competed in and won her first Open division competition — War of the West Invitational.

Not resting on her laurels, “The Canadian Forklift” turned up the heat by winning and setting three new raw world records in the Juniors division at her next IPF outing — the 2018 World Classic Powerlifting Championships.

Per Open Powerlifting, here is a snapshot of Jessica Buettner’s competitive career —

Below are Buettner’s best lifts in sanctioned powerlifting meets —

Additionally, on May 4, 2022, Buettner posted a video of herself deadlifting a 250-kilogram (551.2-pound) raw double in the gym on Instagram. Notably, the weight is 2.5 kilograms (5.5 pounds) over the current International Powerlifting Federation (IPF) raw world record in the 76-kilogram weight class, which she currently holds.

To put this into context, each rep is 3.3 times her competition bodyweight (76KG). Furthermore, she outdid her personal best squat with an unofficial IPF world record raw squat of 220 kilograms (485 pounds) while training with four-time Mr. Olympia champion Jay Cutler.

Thanks to the monster lifts she has been posting on social media, her fans will be expecting big things from her the next time she enters a powerlifting meet — IPF World Classic Open Powerlifting Championships, scheduled for June 6-12, 2022, in Sun City, South Africa.

Jessica Buettner has never pulled the curtain on her training program. However, “The Canadian Forklift” revealed to FitnessVolt that she benches four times a week, squats three times a week, and deadlifts twice a week.

Furthermore, she usually goes heavy on each lift. The powerlifter performs 1-3 reps on each set and follows it up with lighter backoff sets. “Pause squats are my favorite squat variation as well,” adds Buettner.

Being a Type 1 diabetic, Jessica Buettner has to pay special attention to her diet. However, the powerlifter says that her condition has helped her stay disciplined. 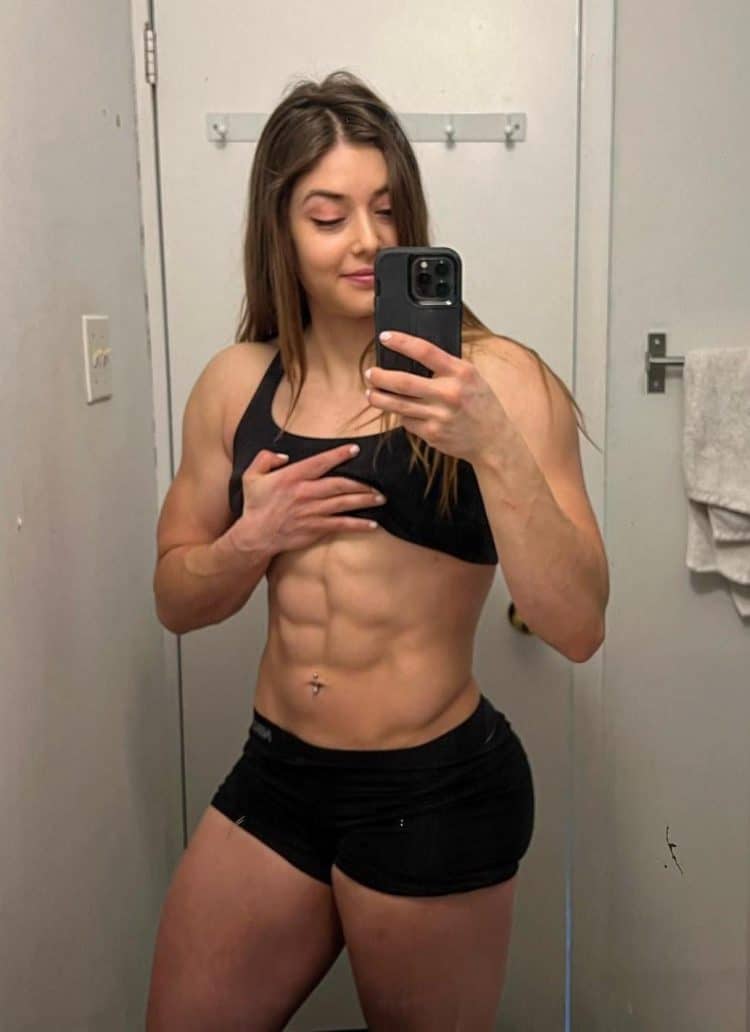 “Having Type 1 Diabetes really helps me keep my diet in check, and it helps me stay in my weight class when I’m paying attention to it properly. But it is really hard in terms of my sugars going up and down while training, and especially in competitions. It’s just something I always have to deal with. I always say that nothing’s impossible with Type 1 Diabetes, but it’s always going to be more difficult.”

“I try to stick a little more on the lower carbs side. I pretty much eat eggs and avocados every single day for breakfast, lots of steak and veggies. Really, really dark chocolate, too. That is a big part of my diet, for sure. Yeah, lots of stuff like that, and tons of natural peanut butter,” adds Jessica Buettner.

During her off-season “The Canadian Forklift” eats around 2,500 to 3,300 calories a day but drops down to a moderate 1,900 to 2,200 while prepping for a competition. She eats one gram of protein per pound of bodyweight to maintain her muscle mass while keeping her carb and fat intake flexible.

Due to type 1 diabetes, the Canadian powerlifter stays around 173 pounds during her offseason. Not going too crazy during the bulking season helps her cut down without too much pressure on her blood sugar levels.

Competitive powerlifting with type 1 diabetes comes with its fair share of problems. “Like if my blood sugar goes low, I’ll be forced to eat which, when you’re trying to cut, really sucks. There’s just mindless hunger when your sugar’s low. Your brain just shuts off and you’re like ‘I just want to eat everything in this fridge,’ so that’s tough,” explains Buettner.

“If your sugar gets too high on the other hand, muscle can start wasting away. So that’s more stressful in general,” adds the powerlifter.

Fitness Volt did an exclusive interview with Jessica Buettner in 2020. You can check it out below —

“Follow my journey to a 500lb squat + 600lb deadlift,” reads Jessica Buettner’s Instagram bio. Judging by her track record and training videos on Instagram, it’d be safe to say that we won’t have to wait too long to see the Canadian powerlifter crush her goals.

At the time of this article’s publication, The 2X IPF World Champion is preparing for her next powerlifting meet — IPF World Classic Open Powerlifting Championships in Sun City, South Africa.

The fourth day of the 2022 IPF World Classic Powerlifting Championships was packed with action and tight battles across both...