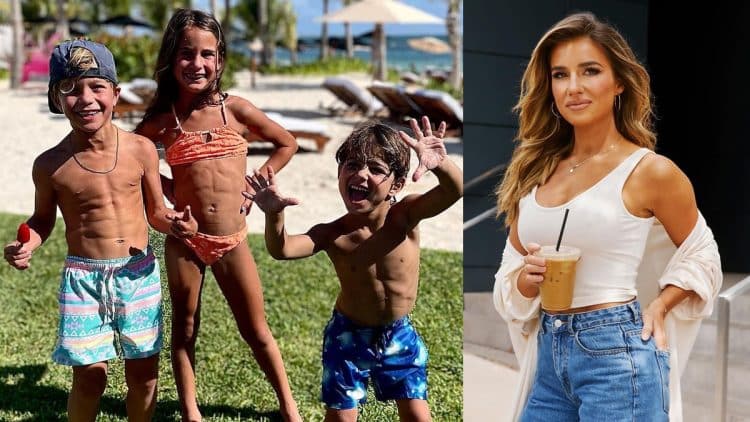 Jessie James Decker issued a statement in response to accusations of photoshopping abs on her three kids in a recent Instagram post.

Decker, a country music singer, was on vacation with her husband and NFL wide receiver Eric, and their three children in Mexico. She recently uploaded a snap of the kids posing on the beach on Instagram. The kids made headlines for being incredibly shredded and received praise for their athletic and fit look at such a young age.

Many fellow celebrities weighed in with positive messages, expressing their amazement at the Decker family’s Thanksgiving Holiday trip picture.

Selma Blair added, “I love these smiles. The strength. So in their bodies. Fun goals.”

However, some took issue with the advanced muscle development of her children. They believe Jessie allegedly photoshopped abs on her kids to make them look more muscular.

“Surely this is an app but I don’t see anyone saying as much,” a user asked.

Decker responded, “Yeah I used an ‘ab’ app on my small children wtf.”

Other than photoshop, some members of the community speculated whether Jessie and Eric were training their kids too hard. Not one to shy away from confrontation, Jessie James Decker hit back at the critics and dismissed their arguments.

Jessie James Decker responds to accusations of photoshopping abs on her kids: ‘let’s be accepting of all people and children’

In a recent Instagram post, Jessie James Decker hit back at the haters who accused her and Eric of overtraining their kids. She also answered to allegations relating to her using digital software to edit their abs in the vacation photo.

“I didn’t plan on addressing this because it’s bonkers but the photos are out there and every single news outlet has posted about this,” she wrote. “When I posted the pix of our vacation and included the kids being silly flexing on the beach on our thanksgiving trip I had NO clue it would get the reaction it did. But Being accused of photoshopping abs on my kids (I can’t help but laugh) or … the polar opposite over “overtraining” our kids makes me realize how bizarre our world has gotten regarding the body and what’s normal and what’s not.

“We preach about body positivity and acceptance but my kids having a mass amount of genetic and built muscle from athletics is ‘weird’? I want to raise my kids to feel proud of their bodies and hard work from either Vivis elite competitive gymnastics to Eric Jr wanting to be like dad as an NFL receiver to little Forrest who spends hours dancing his heart out.

“Let’s not pick and choose what we normalize regarding bodies and be accepting of all people and children. If we wanna do ‘better’ then do better. I’m proud of my children and encourage them to live their dreams. So we’ll see y’all at the 2032 Olympics, and wearing Bubbys jersey in the stands and dancing at Forrests rock concert.”

This isn’t the first time that photoshop allegations have been in the limelight. Earlier this week, Derek, who runs the More Plates More Dates YouTube channel accused UFC star Conor McGregor of allegedly doctoring his photos and/or is using performance-enhancing drugs.

Overall, Jessie James Decker believes the world should be more welcoming of all people regardless of how they look, especially children.

Nearly every person who works out wants to develop a defined six-pack. Yet, very few actually achieve the goal. Part...