Julius Maddox proves that he is a complete overall powerlifter with a 775 lbs (351.5 kg) squat. 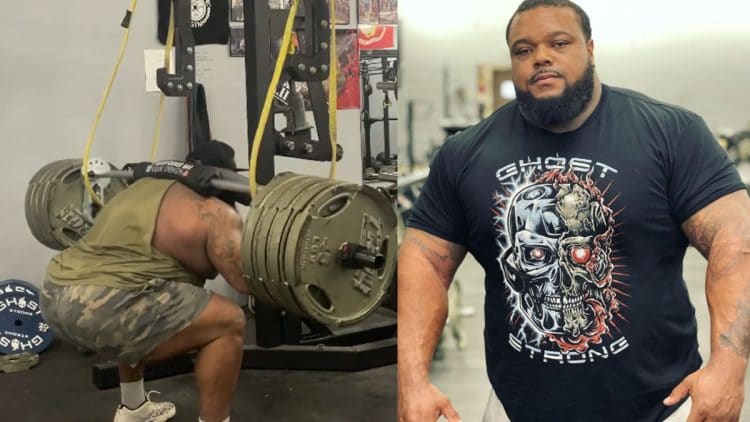 There is almost no doubt that Julius Maddox is the best bench presser currently, as he holds the Official World Record of 355 kg (782.6 lbs). It is because of his prowess in the bench press event, that a lot of people are not aware of the overall strength which Julius possesses. However, his recent Instagram post is a reminder to everyone that he does not neglect the other lifts. On April 5th, Julius Maddox shared a video in which he can be seen destroying a 775 lbs (351.5 lbs) squat. He used a Kabuki Strength transformer bar, which is not lighter than the usual bar but is more comfortable. This bar is multifunctional and safe to use. Julius also mentioned that he hit an 820 lbs (372 kg) Squat PR after, but didn’t post the video yet.

Julius Maddox did not use a lifting belt or any other equipment for this lift, which makes it completely raw. Although Julius did not post the 820 lbs (372 kg) squat PR, the speed of his 775 lbs lift was more than convincing that he is capable of going much heavier.

Julius Maddox has taken part in 17 sanctioned powerlifting competitions throughout his career but has not once taken part in any of the events apart from the bench press. He also doesn’t share his squats or deadlifts regularly, but it is evident that he would excel in a Full Power Meet. If Julius started preparing adequately for the squat and deadlift, there is no doubt that he would lift upwards of 800 lbs in both of the events. When his incredible 700+ lbs bench is added to his massive squat and deadlift, Julius Maddox could post one of the heaviest Totals in the history of powerlifting.

Julius probably won’t take part in a full powerlifting meet soon, but it is not impossible for the future. It seems like Julius Maddox is currently on the hunt for the First-Ever Official 800 lbs Bench Press. The only person that lifted 800 lbs raw was Danial Zamani, but it was unofficial, as he did in training.

Julius is 34-years-old and has a few more prime years ahead of him. He has also tried the 800 lbs bench twice already. His first attempt was in 2020 and was unsuccessful because of the spotters’ mistake. They did not load the bar evenly on both sides, and as soon as Julius Maddox picked it up, he felt that something was wrong. A year after that, Julius attempted the lift again, but this time it was his own mistake that prevented him from lifting it. Julius owned up and explained that there were no excuses, but that he also plans on coming back stronger.

No one except Julius Maddox has actually lifted close to 800 lbs in an official competition. However, the closest one was Kirill Sarychev who held the World Record prior to Julius. He bench-pressed 335 kg (738.5 lbs) at the 2015 WPC-RUS SN PRO Open Cup.

It seems that Julius Maddox is back to his best and is full of desire for new World Records. He recently posted a speedy 735 lbs bench press, and now completed an even heavier squat. It would definitely be extremely exciting to see him take part in a regular powerlifting meet, as everyone believes that he could lift some incredibly heavy weight.

The Iranian Hulk Claims Martyn Ford Pulled Out of Fight, Plans to Sue for Contract Breach