Get in the best shape of your life with the Will Smith transformation program. 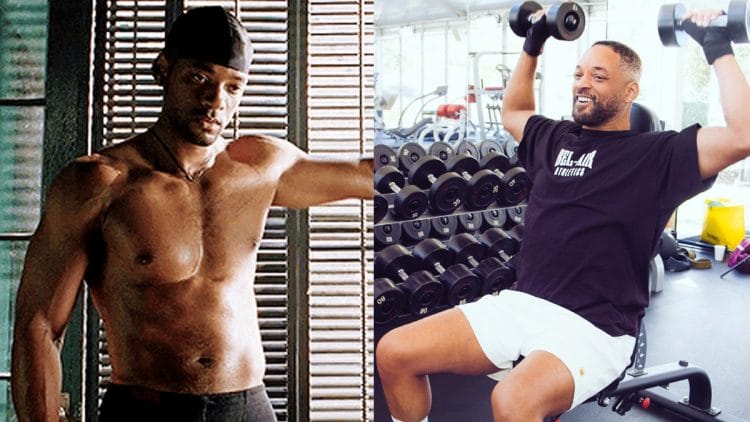 Will Smith (Image via @willsmith)

Although currently in the news for the wrong reason, Will Smith is undoubtedly one of the finest actors of our generation. The versatile actor has worked in every genre imaginable — comedy, sci-fi, romance, drama, thriller, action, you name it, and he has done it. However, his action films generally do the best at the box office.

The Fresh Prince has played some of the most badass action characters on screen. Whether it be Muhammad Ali in the biopic Ali, Deadshot in Suicide Squad, or the rocket-deflecting Hancock in the titular film. Furthermore, his ripped physique in movies like I Am Legend and I, Robot earned him a cult fitness aficionado following.

Smith’s action skills are second to none — a glimpse of which was on display at the 94th Academy Awards. He has been getting a lot of flack for the infamous Chris Rock slapping incident, and rightly so, but it is unlikely that will hurt his acting career or slow down his movie churn rate.

Will Smith is one of the most transparent Hollywood A-Listers. He routinely pulls back the curtain on his life on his YouTube channel and takes his fans for a ride with him. He recently shared a six-part mini-transformation series on YouTube called “Best Shape of My Life.” In the series, Smith vowed to lose 20 pounds in 20 days. Spoiler alert: he made it.

Smith’s most-recent transformation journey was special as it showed him deal with common fitness problems like ego-lifting. In this article, we’ll be going over the training and diet program the Suicide Squad star used for his transformation.

Will Smith was arguably in his best shape while playing Floyd Lawton, aka the super-villain Deadshot, in Suicide Squad. His eight-pack abs were the result of a strict diet and training regimen.

Whenever Smith decides to transform his physique, he calls upon personal trainer Aaron Ferguson to help him get the ball rolling. Ferguson is a little different from the internet celebrity fitness trainers of today. He doesn’t believe in fad diets or training programs and instead had the Fresh Prince follow a conventional training and diet program.

“I knew from the very beginning that this was going to be a big movie for me.” — Smith after Suicide Squad set a new record for the largest domestic opening at Box Office.

“He knows what he’s doing,” says Ferguson while discussing Smith’s transformation diet for Suicide Squad. The film star used similar dieting principles in his YouTube Original series “Best Shape of My Life” to carve a lean physique out of his dadbod.

Being a Hollywood A-lister, Smith has the best in the business to help him with his transformation. He has a nutritionist prepare his diet plan, a chef cook his meals, and a personal trainer guide him through his workout.

When training to lose weight, the Men in Black star follows a calorie deficit of 500 calories a day. While most people would roll their eyes hearing about his 20 pounds in 20 weeks weight loss target, the actor had a solid (and practical) plan in place to achieve his goal.

You could quicken your weight loss journey by increasing your calorie deficit, but it puts you at risk of snapping back to your original weight as soon as you stop following the strict diet. Additionally, following a 500 calorie-a-day deficit is more sustainable and won’t leave you feeling drained throughout the day

While transforming his physique to play Deadshot, Smith ate 3,500 calories a day. The Fresh Prince varied his meal size on the fly to fix any discrepancies on days he ate too much or burned more calories than usual.

Will Smith is a fan of the Optimum Nutrition protein shake and uses it to meet his daily protein requirement.

Smith adheres to the following principles while following a physique transformation program:

Progressive overload is the name of the game when it comes to resistance training. If you stick to lifting the same weight in every workout, you’ll eventually hit a plateau. Remember: It’s easier to avoid a plateau than to break through one.

2. Learn How To Train Around Injuries

Smith’s training regimen for Suicide Squad was so intense that he tore his calf during a cast parring session early in production. “It was really scary to be in that position. When you’re 47 years old, no injury is a mild injury anymore,” explained Smith. “I was stepping back to throw a blow, and my calf popped. Everyone heard it. The doctor there told me that I was going to be down for six weeks, but I couldn’t allow that.”

The Fresh Prince did not let this injury stop him from resuming shooting. Along with his personal trainer, he devised a workaround and surprised everyone with his diced physique in the movie.

3. Stick to the Basics

Many newbie lifters make the mistake of pursuing the newest training and diet fads. However, Smith’s personal trainer took a different approach.

“I like a more traditional bodybuilding routine. Using very controlled motions with not too much weight, but perfect form,” — Ferguson on Will Smith’s training regimen for Suicide Squad.

Next Read: How to Build a V-Taper – Training Guide and Nutrition Tips

If you are on a deadline, staying physically active throughout the day can help put your weight loss journey on the fast track. Smith had 10,000 steps a day goal, and he, on some days, doubled down on it by logging 20,000 steps.

Non-Exercise Activity Thermogenesis (NEAT) is the energy expended for everything we do that is not sleeping, eating, or sports-like exercise. In a weight loss program, your goal should be to maximize your NEAT, especially if you have a desk job. [2]

Will Smith followed a five-day training split and used the weekend to allow his muscles time to recuperate from his intense training routine. He also performed an ab training routine on alternate training days to sculpt an eight-pack for his role in Suicide Squad.

Here is what Smith’s five-day training routine looked like:

Besides the five intense workouts a week, Smith incorporated an ab training routine into his training regimen to make his abs pop, and pop they did.

The Focus star relied on two moves for his eight-pack — crunch machine and leg raises on a pull-up bar. Use the following instructions to make the most of these exercises:

Ferguson had Smith perform anywhere between 6-8 reps on each exercise, which also applied to the crunch machine. He treated his abs like any other muscle group and went super heavy on the exercise.

While performing the lift, focus on powering into the crunch, and then do a slow three count on the way back. Keeping your head down so you are looking to your stomach can help increase the intensity of the crunch.

On the eccentric part of the lift, go all the way back until the weights are almost stacked. Furthermore, make sure you keep a flat back while performing the exercise as it will help you achieve optimal ab recruitment.

Will Smith performed the toes to the bar variation of the hanging leg raise to build an eight-pack for his role in Suicide Squad. While performing the exercise, keep your legs straight and knees locked out for a better middle and lower ab engagement.

To get the best bang for your buck, keep your toes pointed out as you lift your legs toward the pull-up bar. Pause and contract your abs at the top. Also, make sure you’re not using momentum by swinging back and forth to raise your legs. Doing so will result in back recruitment, which will take tension off your back.

Ferguson has Smith perform controlled negatives on the hanging leg raise. You are leaving gains on the table if you let gravity do its thing on the way down.

Pro tip: Once you are back to the starting position — body in a straight line, extend your legs back behind you a little. It will help generate power for the next raise and will help stretch your abs.

The Fresh Prince’s training and diet program are no joke. Will Smith lost 20 pounds in 20 days, proving that he knows what he is doing. If you are serious about transforming a physique, Smith’s five-day training program is the perfect place to start.

If you are a beginner, increase the reps performed in every set from eight to twelve, as it will help you achieve hypertrophy (an increase and growth of muscle cells) and improve your form. Also, instead of setting an audacious 20-pound weight loss target, begin with a goal of losing 10 pounds in 30 days. Best of luck!