JF Caron reflects on scoring third at last year's WSM, explains what he plans to do differently this year, and talks his world record Hummer Tire Deadlift 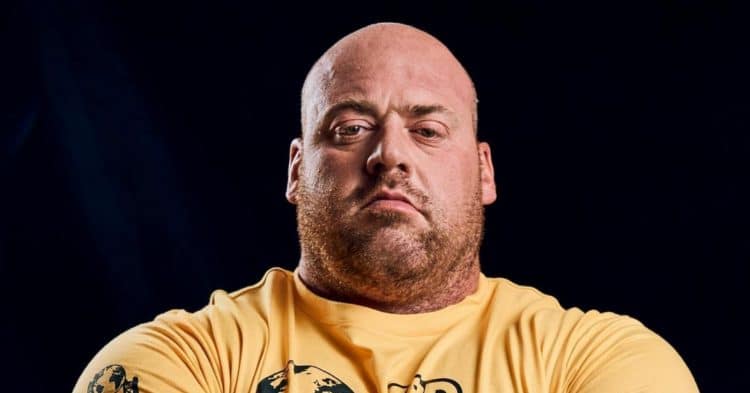 The 2021 World’s Strongest Man takes place June 15th-20th, in Sacramento, California. However JF Caron believes that the winner of this contest may come down to endurance over strength, when it is all said and done.

The majority of this year’s WSM will be taking place in weather that exceeds the triple digits, with forecasts for the week shooting as high as 110ºF at the time of writing. This is hard on everyone, but for a Canadian like Caron, this is a big shift from what he is used to.

Speaking with Fitness Volt ahead of the 2021 WSM, the Quebec native joked about how it was too hot for his liking. However on a more serious note, he explained that this grueling forecast could spell trouble for some of the other athletes.

“(My goal) is quite simple: don’t (make) any mistakes. You know, last year the only guy that didn’t make a mistake was (Oleksii) Novikov,” Caron said.

“It’s now very close and just one mistake can change the whole competition. The most consistent athlete will win, and with this warm weather, the toughest guy will win, maybe not just the strongest.”

Just after coming third place at the 2020 World’s Strongest Man, JF Caron made a quick turnaround to compete in the first ever Shaw Classic. While he came in second here, he did score a new world record in the Hummer Tire Deadlift, pulling 1202lb.

Apparently this came as a complete shock to the Canadian, who had never done that type of deadlift before. Despite how impressive he looked, he says that this was not even the best he has to offer, and that he is much stronger now, ahead of the WSM.

“I had no idea (I would score the world record) because I had never tried this bar,” Caron said with a chuckle.

“It was my first time on that. I felt pretty great at the Shaw Classic, but I don’t think that was my best shape for deadlift in that moment, but I pulled very big weight. I’m much stronger now.”

That being said, just because it was his first time with Hummer Tire Deadlift does not mean that Caron wants it to be his last. In fact, he hopes to eventually beat his own record, and deadlift more the next chance he gets.

“That’s a goal, to improve this year at the Shaw Classic, the record. But it will be harder this year, because we already have the events. This year it’s 8 events, not six,” Caron noted.

“The day before, we have a squat for reps. Then I think the Hummer Tire Deadlift will be the first event of day two. So I think it will be hard to beat that number, after a big day of contest, and a squat for repetition.”

At the Shaw Classic, JF Caron got the better of 2020 WSM winner Oleksii Novikov, and came just behind Brian Shaw. This is some experience that he hopes to bring with him into the WSM this year, to try replicating some of his results.

That being said, he also knows that it is a matter of how the events shake out. He feels like there are some athletes who are starting the contest at an advantage, competing in events that favor their skillset right away.

“Everybody’s so close. I beat Novikov at the Shaw Classic, so I know he’s beatable. I’m confident, but with this set of events, I think Brian and Tom Stoltman will be the hardest athletes to beat,” Caron said.

“Tom starts the contest with a sure win on Stones, and in my opinion, Brian starts also with a win, with the Keg for height. It’s a big advantage when you start with an event like that, but you never know until the end. I will take this competition very seriously, one event at a time, and I know that I can follow the strongest guys in this lineup.”

As far as what he expects from the competition, Caron says that he is taking it one step at a time. At 38 years old, he knows that he does not have a ton left, but he absolutely loves competing, and is excited to do so at this year’s WSM.

“I’m very passionate. I love the sport. Sometimes many people ask me ‘Why don’t you stop? You’ve done many contests and many years,’ I will turn 39 this month. I just love strongman, it’s that simple. I love to compete,” Caron said.

“I know I’m older. I take one contest at a time, and I don’t make any plans. I just keep going.”

JF Caron will have the opportunity to improve upon his third place score at last year’s World’s Strongest Man, by competing this week. Stay tuned to Fitness Volt for updates on his performance, as well as the results from the rest of the competition.