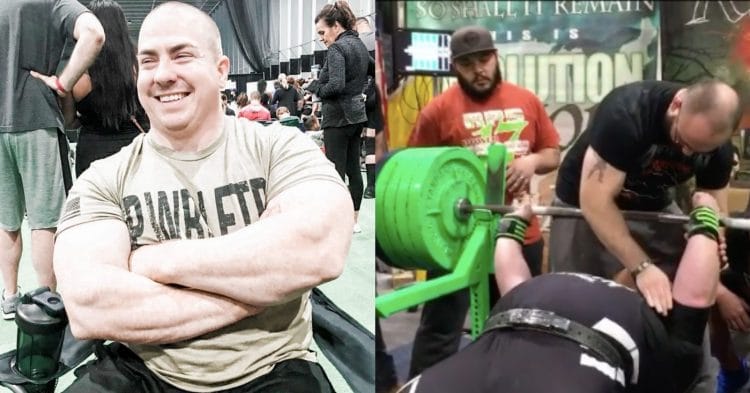 Prior to this weekend, Jimmy Kolb was a four-time ATWR holder with the bench press. Today, he is a five-time all-time-world-record (ATWR) holder with a recent bench press of 476kg/1,050lb performed at the Revolution Powerlifting Syndicate competition in New Jersey.

The bench press occurred this weekend in Bellmawr, New Jersey, and was performed at the Revolution Powerlifting Syndicate (RPS) North American and New Jersey Championship.

Powerlifter Jimmy Kolb is an equipped bench press specialist and now has a renowned history of lifting some serious numbers.

Jimmy Kolb posted the bench press on his Instagram, saying,

“1,050lbs Single Ply and Drug Free
.
This puts me at 5 current all-time world records and this lift is the heaviest 308 single ply in history AND the heaviest single-ply ever done.”
He sent a long list of thank-yous, including to Anderson Powerlifting among others, for their sponsorships and “never-ending support and friendships.”

Single-ply equipment is a powerlifting term that refers to the suit the athlete wears. It is one layer of tight and heavier polyester or denim fabric to ensure they can lift more weight. Kolb’s suit was a single-ply bench shirt and a singlet for the competition.

Kolb was running late for the competition and missed his first lift. The lift occurred on the second round of competition lifts. He attempted a heavier lift of 507.9kg/1,120lb on the third lift, but was unsuccessful, according to his Instagram stories.

But Kolb didn’t need it. His second bench press earned him three white lights from the judges.

Watch his performance below, with a 308 single-ply. He posts the lift from three different angles.

Jimmy Kolb beats his personal bests frequently. His previous records were at the PA State Powerlifting Championships Pro Open on February 29, 2020. There he benched 1,035 pounds.

Prior to that, he lifted at the Drug Tested Virginia Commonwealth Games on July 28, 2018, where he performed another personal best with a 451.9 raw bench press.

There is no word on the next time we will be seeing Jimmy Kolb compete again. However whenever it does happen, it will surely be a noteworthy experience to watch.