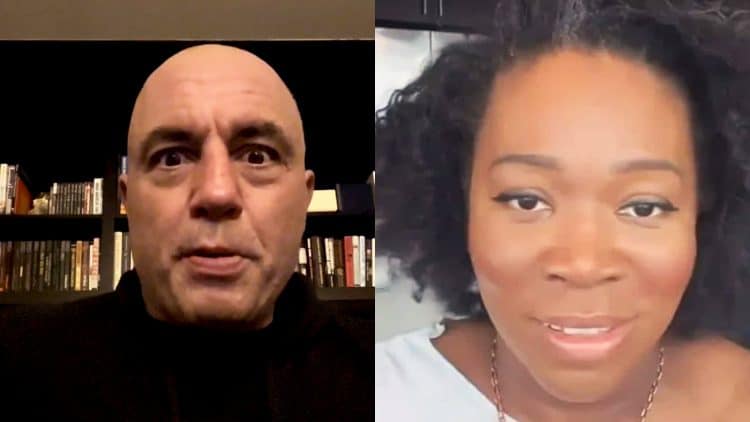 UFC Color commentator and popular podcaster Joe Rogan has found himself in the middle of controversy due to alleged racist remarks. Shortly after many musicians boycotted Spotify over Rogan allegedly spreading misinformation about Covid-19 on his podcast, singer India Arie has shared a clip of Joe Rogan referring to black neighborhoods as ‘Planet of the Apes’. Joe Rogan has since apologized for using the ‘f***ing horrible’ N-word.

India Arie released the footage shortly after she announced that she will remove her music from Spotify and cited Joe Rogan’s language around race as the reason for her decision.

“He shouldn’t even be uttering the word. Don’t even say it, under any context. Don’t say it. That’s where I stand. I have always stood there,” India Arie stated.

India Arie decided to come out with her comments after musician Neil Young also boycotted the platform. Musicians like Neil Young, Joni Mitchell, and now India Arie removing their music from Spotify has resulted in a $2billion loss of market value for the platform. Rogan has also been accused of spreading Covid-19 related misinformation on his podcast.

On January 30th, 2022, Spotify CEO Daniel Ek issued an official statement to address the issue. In his statement, Ek assured that they will be adding a special Covid-19 advisory to all the relevant podcast episodes to avoid the spread of misinformation.

“This advisory will direct listeners to our dedicated Covid-19 hub, a resource that provides easy access to data-driven facts, up-to-date information as shared by scientists, physicians, academics, and public health authorities around the world, as well as links to trusted sources,” Daniel Ek stated.

“There’s a compilation made of clips, taken out of context, of me of 12 years of conversations on my podcast. It’s all smooshed together and it looks f***ing horrible, even to me.” Rogan said

Joe Rogan said it was taken out of the context.

“I know for most people there’s no context where a white person is allowed to say that word – and I agree with that now,” he said.

“I haven’t said it for years. But for a long time, when I would bring that word up, instead of saying the N-word, I’d just say the word. I thought as long as it was in context people would understand what I was doing.”

Rogan said the slur is “a very unusual word, but it’s not my word to use”.

“I’m well aware of that now,” he added. “I never used it to be racist, because I’m not racist, but whenever you’re in situation where you have to say ‘I’m not racist’, you’ve f***ed up. And I’ve clearly f***ed up.”

“There’s nothing I can do to take that back – I wish I could. I do hope, if anything, that this can be a teachable moment.”

Rogan addresses the ‘N-word in the Viral clip.

“I was telling a story on the podcast about me and my friend Tommy and his girlfriend,” he told his followers. “We got really high and we went to see Planet of the Apes. We got dropped off in this all-Black neighborhood and I was trying to make the story entertaining. I said, ‘We got out and it was like we were in Africa, we were in Planet of the Apes.

“I did not and nor would I ever say that Black people were apes, but it sure f***ing sounded like that. I immediately said afterwards it was a racist thing to say; Planet of the Apes wasn’t even in Africa.”

“It wasn’t a racist story, but it sounded terrible.”

Joe Rogan Responds to The Backlash

Joe Rogan also issued a statement in a social media post on 30th January 2022 after receiving the backlash. However, this was before India Arie released the footage of Joe Rogan’s controversial remarks. Rogan feels that a lot of people have ‘distorted perception’ about his podcast might be based on ‘sound bites and articles that are disparaging.’

Rogan claimed that his podcasts are just conversations. He added that he does not plan the topics that he is going to talk about. Furthermore, Rogan admitted that he does not always get it right. Courtesy of Joe Rogan’s Instagram account, you can watch the full video here:

Rogan’s apology received a mixed response on the internet. Many notable personalities defended Rogan in the comments section of the video and wrote:

“Keep it up @joerogan ! There’s enough room for all viewpoints and all viewpoints are needed to help make voluntary decisions.” MMA fighter and former Bellator champion Michael Chandler wrote.

“Respect. Too bad all media doesn’t take this balanced approach, regardless of their viewers beliefs,” Cameron Hanes wrote.

Iconic Bodybuilder Marvin Eder Has Passed Away at 90