The decorated Strongman competitor hits strength and conditioning ahead of the March showdown with "The Mountain". 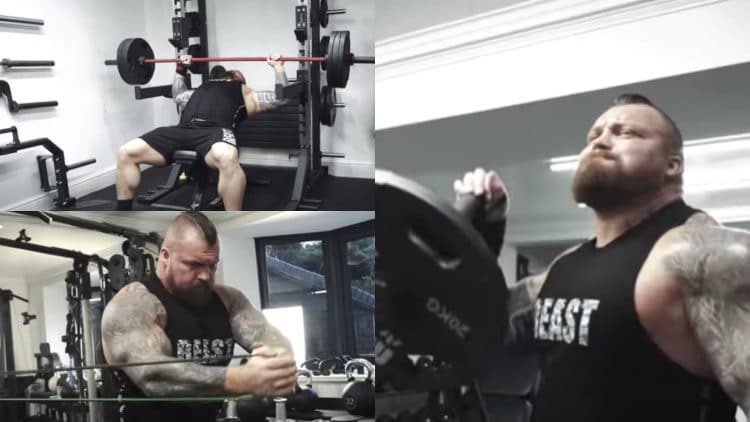 Former Strongman competitor Eddie Hall is getting a taxing workout ahead of his blockbuster boxing match with Hafthor Björnsson. Recently, Hall shared a video detailing his strength and conditioning program seven weeks out from the big fight.

Eddie Hall is the 2017 World’s Strongest Man. In addition to securing the WSM title, Hall has also captured titles in the UK’s Strongest Man and England’s Strongest Man a number of times. While his work as a Strongman is on the backburner now, Hall always came into competition prepared to give it one-hundred percent effort.

After Eddie Hall suffered a bicep injury, his fight against Björnsson was temporarily put on hold. The two Strongman-turned-boxers have steadily improved their physiques to facilitate their transition into a new sport. As of this writing, the venue is set for Las Vegas, NV.

While Hall suffered a setback, Björnsson has already tasted what it’s like to compete in “the sweet science”. In fact, “The Mountain” made his foray into the boxing ring last year with a TKO victory in his first professional fight against Devon Laratt. With time dwindling away, it appears both competitors are priming their bodies for combat.

Looking to make gains before the showdown with the 2018 World’s Strongest Man, Eddie Hall shared his ‘Full Boxing Strength Session’ on his YouTube channel. It would appear that Hall is suggesting the fight will take place in late March.

“The fight is going to be announced very soon. So, we’re roughly seven weeks until the fight, so strength and conditioning is on top of my list. I want to stay big and strong. So yeah, today is going to be a good shoulder hit, a good leg hit, good torso hit, everything really.” Eddie Hall shared.

Below you can find a list of the exercises practiced in this video:

While wearing a weighted belt, Hall began his routine with kneeling medicine ball slams. Following the opening exercise, the Strongman moved on to planks while holding a 28-kilogram kettlebell. The workout saw Eddie Hall lift the kettlebell from side to side while it was beneath him. Next, Hall worked through Bulgarian split squats with a safety squat bar. The Strongman’s top set amounted to 110 kilograms (242.5 pounds).

Hall then moved his workout routine back to the upper body. Starting with standing resistance banded landmine presses. This workout in particular is intended to help with punching power. In essence, the exercise is like throwing a hook only with weight attached, and Hall is obviously punching higher as to visualize his massive opponent, Hafthor. In addition, the movement resembles the same shifting in the hips as a punch. Then, Hall maxed out on the incline bench press with a 205 kilograms (452 pounds) triple with a wrist wrap on his right hand only.

Moving on, Eddie Hall began trap bar deadlifts with a suspected weight of 270lbs. Then quickly increased the load to 190 kilograms (418.9 pounds). Following the deadlift routine, Hall began rotational work with a resistance band. Those were triplesets and followed up with medicine ball slams and burpees. Finally, Hall finished the session with Iron Neck, a device designed to help strengthen neck muscles and is thought to help prevent fighters from being knocked out.

Just like his career in Strongman, Eddie Hall doesn’t short-change himself when it comes to making gains in the gym. Hall’s ‘Full Boxing Strength Session’ is comprehensive and the former WSM appears to be conditioned and ready to throw hands this March.