Joe Rogan Gets Mocked For His Thoughts On Chris Cuomo, And Corrects His Stance On The Fake Weight Video 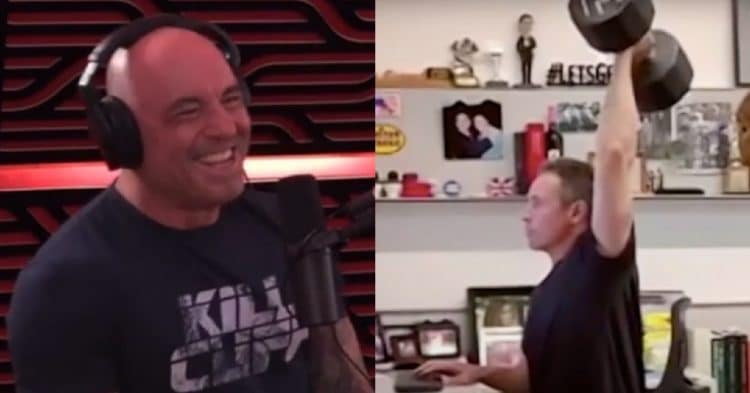 The strength sports community was not exactly impressed when Joe Rogan took to the defense of Chris Cuomo, over controversies involving fake weights. Now he sets the record straight, and corrects himself with more knowledge of the situation.

CNN reporter Chris Cuomo had the internet buzzing over a picture and video of him seeming to overhead press a 100lb dumbbell with ease. While basically anybody that has ever done weight training has called it fake, Rogan actually defended Cuomo on his podcast. He basically explained that because Chris is Italian, it is very possible for him to be that freakishly strong.

Since this, people have been pointing out the fact that this is an incredibly unrealistic thing to do, and that Joe Rogan was wrong on the matter. In fact, Scott Herman, who is known for discrediting people for using fake weights, posted a video to his YouTube channel to lightly mock Joe for saying what he said. Not only that, but he breaks down how clear it is that the weight is fake.

“(Joe) brings it up and you can tell that he clearly has seen the story before he started the podcast, that’s how he knew about it. So he had plenty of time to dig into it and see. He could have gone to his gym, or if he has in his house. I mean, I’ve got a dumbbell right here, and you can literally look in the mirror and just hold it and see the tension in your body from holding a 100lb dumbbell.”

Now, to be fair Joe Rogan did have a bit of a mea culpa on his podcast, a few short days later. Speaking with Tom Papa he explained that after hearing the backlash from fans, he directed his attention to some experts. He spoke with both Rob Kearney and Robert Oberst, two of the best strongman athletes on Earth. Both men expressed serious doubts in the legitimacy of what Chris Cuomo did, and this has changed Joe’s mind.

“It did look very light, so my thought was how big is Chris Cuomo?” Rogan explained. “I thought that he was bigger than he is. So I googled it, he’s only 182lb, it says he’s 6’2 and 182lb. I don’t know how accurate that is, but that makes him 20lb heavier than me. So very unlikely that he’s carrying that dumbbell like that.

“So then I’m like okay, I’ve got to ask some people who would actually know. I sought out some people online, and one of them was Rob Kearney. He’s been on the podcast before, he’s the World’s Strongest Gay,” Rogan continued. “He says ‘I just watched the video, I think it’s fake lol. He doesn’t look to be bracing hard enough for it to be 100lb.’ He’s a real expert, he’s am actual strongman so I’m pretty convinced.

“Then I asked Robert Oberst. Robert is f–king enormous. Absolutely one of the strongest men in the world. He’s a goliath,” Rogan said. “He says ‘The picture looks possible because the elbow is up and stable. But the video where he’s at his desk showing the weight off, he moves it around, out at an angle that would be at the smallest head of the top of the bicep, taking all the weight and it doesn’t faze him. If it’s real, he’s stronger than anyone I’ve ever seen use a dumbbell. I’d say it’s a 40lb weight with 100lb written on it. Lots of Insta-famous lifters have faked dumbbells and plates.’

“So two experts, Rob Kearney and Robert Oberst, both of them call bulls–t, so I defer to them.”

It is good to see that Joe Rogan was willing and able to reach out to some legitimate experts to understand that Chris Cuomo’s video is fake. Although it would have been better if he had done so before speaking on it the first time.