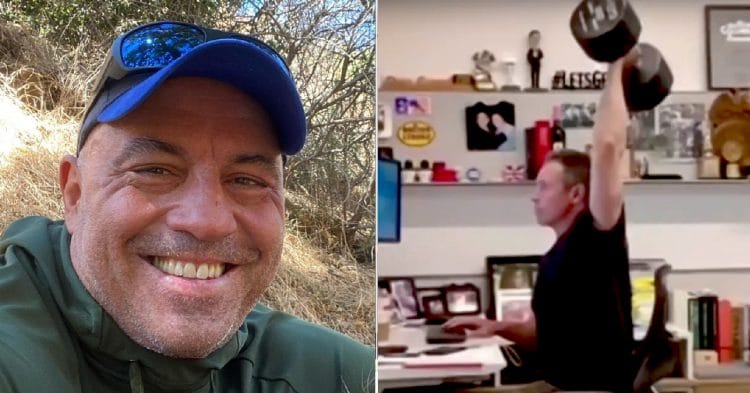 The strength sports world was buzzing when CNN journalist Chris Cuomo was called out for apparently using fake weights. Now Joe Rogan weighs in on the controversy, and he is siding with the CNN reporter.

A couple of weeks ago, photos and videos emerged of Cuomo using a 100lb dumbbell, holding it over his head and pressing it with relative ease. This prompted some people in the bodybuilding community to question the validity of the claims that this was real weight. In particular, Marc Lobliner challenged the media personality to prove that the weight was real, going as far as to attempt a similar feat, showing how difficult it is.

Prove you’re not a liar. Prove that you can actually lift the weight you’re shown with.

I will fly anywhere you’d like to witness it and we can either have a charity event or I’ll donate $1k to a charity of your choice.

Marc Lobliner is not the only way discussing this controversy from Chris Cuomo.

Joe Rogan also took to his podcast to discuss whether or not he thinks that the weight is real. In his opinion, it is not unreasonable to assume that the weight it real, because there are some people who are just naturally strong like that.

“Chris Cuomo is, I’m Italian I can say this, he’s a guinea,” Joe Rogan said. “A lot of those guineas are stupid strong, they’re monkey strong. A lot of them. There was a guy that used to run a sandwich shop by our house, who could curl his own body weight ten times. Nobody believed him, and this guy barely lifted weights, and he did it before a wrestling meet…and he wound up losing the wrestling meet. It was like a legend in the town, because his arms were blown out because he made like a hundred bucks on a bet, showing people that he can curl his bodyweight ten times.

“That’s real,” he continued. “That’s a real weight. Whether or not that weighs 100lb, it might weight 100lb. I don’t believe that (Cuomo) has a fake hundred-pound weight. He’s a big person. I think that guys pretty large…Here’s the thing, I see these people complaining and saying that it’s not real and all this s–t. Listen, you can do that. That can be done. People who think that you can’t do that are crazy.

He’s bigger than me, and there’s a video of me on Instagram with a 92lb kettlebell and I’m cleaning it and pressing it ten times over my head. That guy’s a lot bigger than me. He can hold 100lb over his head and do it like that. If I had 100lb dumbbell in my arm right now, I could press it. He’s bigger than me, he can do it. Some people are f—ing strong.”

and here you can watch the reply from Marc Lobliner

What do you think of how Joe Rogan, and his assessment of the situation? Do you believe Chris Cuomo really lifted a 100lb dumbbell?