The photo of the CNN journalist caught the attention of bodybuilder Marc Lobliner who challenged the former to prove it's real weight. 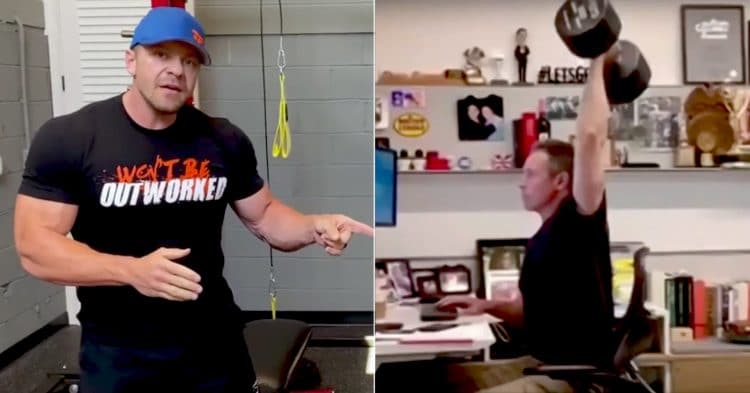 A photo of TV journalist Chris Cuomo of CNN’s Cuomo Prime Time (brother of NY Governor Andrew Cuomo) has been circulating around the internet where he’s holding what appears to be a 100lb dumbbell overhead while typing at his desk (taking multitasking to a whole new level).

A 100-pound dumbbell is heavy indeed, especially to stabilize it overhead while sitting up straight on a chair and typing. However, it’s not necessarily an impossible feat. But for Cuomo and most seasoned lifters? it probably ain’t happening, even if he is friends with one of the baddest men on the planet, and former powerlifting champion C.T. Fletcher, who called him an Iron Addict in a post.

Marc Lobliner, a professional bodybuilder, fitness YouTuber, and owner of Tiger Fitness, was not pleased with the situation. He took to Twitter where he posted a video, challenging Cuomo to prove that the weight was real.

“If you are part of the lifting community or know anybody who is, there’s one thing we hate, and that’s when you fake it because it makes what we do, look insignificant,” said Lobliner. “I’m confident those are fake dumbbells and I’m also willing to bet Chris Cuomo $1,000 that he can’t sit at a desk holding a 100-pound dumbbell typing.”

Lobliner even went as far as to replicate what was shown in the photo, using an adjustable dumbbell loaded with 102 pounds, and he could not even get the weight off of his shoulder, as big and strong as he is.

Prove you’re not a liar. Prove that you can actually lift the weight you’re shown with. I will fly anywhere you’d like to witness it and we can either have a charity event or I’ll donate $1k to a charity of your choice. PLEASE RETWEET!“

“If you lie about that, how are you going to be credible on the news? Your fans and the people who follow you who don’t know lifting, don’t know how disrespectful this is to the lifting community, and how fake this is, they think you’re that strong.”

Lobliner then challenged him to a liftoff but so far, no response from Cuomo. There has been a problem with people in the industry lifting fake weights and claiming that they’re real, and we don’t really need to mention names.

But this is clearly a fake weight that even has Cuomo’s name written on the side that implies the gimmickiness. Not to mention, there’s a social media clip of him casually pumping out presses and curls with this weight.

“Just getting a little pre-show pump, you know… hundred pounds, you know, just kinda work it out, light stuff,” he said in the clip when asked what exactly he was doing.

What do you think? pic.twitter.com/srpMwBCA0V

Many responded to Lobliner’s post and even offered to throw in money if the challenge is accepted. But that won’t be needed here. It’s definitely fake weight!

Prove you’re not a liar. Prove that you can actually lift the weight you’re shown with.

I will fly anywhere you’d like to witness it and we can either have a charity event or I’ll donate $1k to a charity of your choice.

The strength sports community was not exactly impressed when Joe Rogan took to the defense of Chris Cuomo, over controversies...

The strength sports world was buzzing when CNN journalist Chris Cuomo was called out for apparently using fake weights. Now...

Without a doubt, the fitness community was one of the heaviest hit by the current global health crisis. Now several...

Bradley Castleberry has nearly 750k followers on Instagram, but the super-jacked lifter has encountered some criticism among the online lifting...