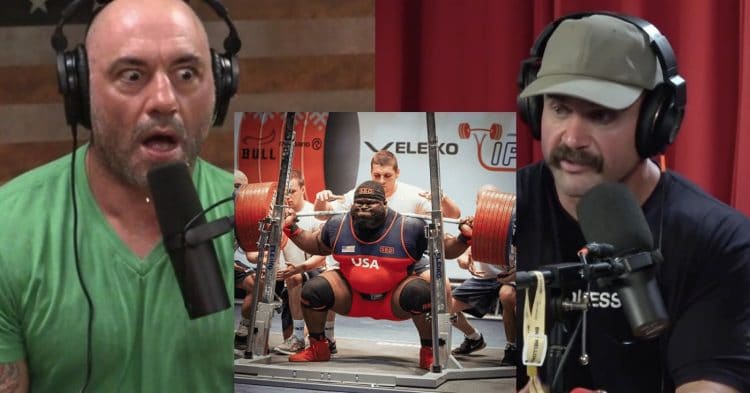 When it comes to drug tested powerlifter, few athletes are more impressive than Ray Williams. His muscle density was enough to even impress the likes of Joe Rogan and Mark Bell.

Rogan recently discussed the skills and physicality of Williams when speaking with the World’s Strongest Gay, Rob Kearney, leading to Bell reacting to the clip. It is not hard to understand why though, considering the type of beat that Ray is.

Standing 6’1 and weighing upwards of 400lb, Williams is a natural powerlifter, who currently holds the world record for the heaviest raw squat done in a drug tested competition, at 1080lb. However this is not the only thing that amazes people, as people are also blown away with the fact that he has 300lb of fat-free mass on his frame, which is insane especially for someone who is regularly drug tested.

This was the topic of discussion that Joe Rogan and Rob Kearney brought up on a recent episode of JRE. Here the World’s Strongest Gay showed Joe some videos of the beats of a man that is Ray Williams, and Joe was nothing short of amazed.

“30 kilograms more than anyone they ever studied,” his producer added.

Mark Bell saw this clip from Joe Rogan and wanted to react to it on his YouTube channel. His reaction was much like Joe’s, in that he is absolute dumbstruck that Ray Williams can have this kind of mass.

He then explained that his own heaviest squat was 1080lb as well, but he did it fully equipped and with steroids. So for Ray to be able to do that raw, and drug free is absolutely staggering.

“The video we were watching, he was just squatting 1080. My best squat is 1080 as well, but keep in mind I was not in any drug tested category, and I’m wearing lifting briefs that assist you with the lift. They are multi-layered. I’m also wearing knee wraps, Big Ray was only wearing knee sleeves, and in addition to that I had a squat suit on,” Bell said after watching the clip from Rogan.

“These things are helping me lift hundreds of pounds more than what my body is actually capable of, along with the performance enhancing drugs, and Big Ray is doing that s—t raw, and he’s being drug tested. Fricken unbelievable.”

Bell was then asked if Williams could be compared to anybody, even in other sports, like Rob Kearny who was talking with Rogan, and does strongman. However Mark made it clear that he did not think there was anybody quite like him, at least in drug tested super heavyweights.

Ray Williams is an absolute unit, and it makes sense for Joe Rogan, Mark Bell, and Rob Kearney to be impressed. He has to be one of the most naturally powerful men to ever walk the planet.

Mohamed Shaaban Goes Off On Judges After 2021 KO Pro Egypt: ‘I Feel Like They Just Don’t Want Me Up There’