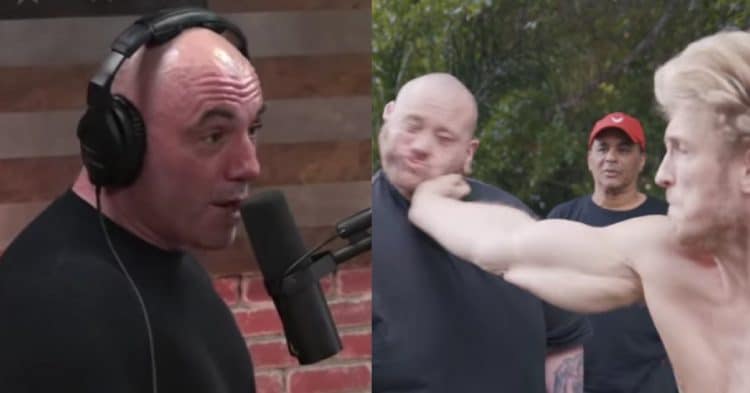 Joe Rogan is a fan of most styles of combat sports. However one “sport” he is not a fan of is the slap fighting that has sparked up in Russia. He voiced that dislike when watching Logan Paul give the sport a try.

Rogan is an advocate for all things martial arts. From his background in taekwondo and Brazilian Jiu-Jitsu, to his longtime role as UFC commentator, he has a ton of experience with various forms of combat. However he does not care much for Russian Slap Fighting.

Russian Slap Fighting involves two contestants standing face to face, as they take turns slapping each other in the face as hard as they can. That is all there is to it; no defense, just slapping. As a result, it often ends up with one contestant unconscious or quitting the match.

Someone who gave this style of competition a try, is YouTube star, Logan Paul. Back in 2019, he did some training with the intent of competing as a slap fighter. Furthermore, he even had a practice fight, which ended with him slapping a rather large fellow into unconsciousness with his first shot.

Joe Rogan watched this video, alongside Bryan Callen, Eddie Bravo, and Brendan Schaub, on a recent episode of his podcast. Joe is known for voicing his opinion, and this time was no different. Here, he did not hold back on how ridiculous this was, as well as the whole concept of slap fighting.

“Those contest they have, when they stand in front of each other and slap each other, what is going on?” Rogan said. “What?! Who’s the dumb motherf—er who lets you hit them first? You have to be so dumb, unless you know the guy has nothing.”

The four of them watch, as Logan Paul takes his shirt off, and swings his hand into the approximately 350lb man’s face as hard as he could. Just like that, the man was knocked out cold, coming to and asking what happened. It was so severe that Rogan suggested that the man likely received some sort of brain trauma.

Logan Paul went on to say that he felt really terrible about the way he hurt the man in the video. At least he and Joe Rogan can agree that slap fighting might not be that great of a sport.