At the press conference ahead of the 2020 Mr. Olympia, Classic Physique bodybuilders Chris Bumstead and Breon Ansley share a fiery exchange of words 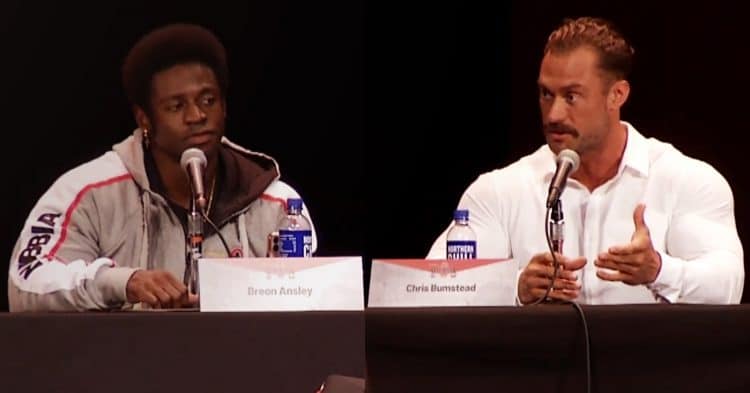 One of the most fun storylines to follow heading into the 2020 Mr. Olympia, has been the rivalry between Classic Physique champ Chris Bumstead, and former champ Breon Ansley. At the press conference, just a few days before the contest, the two elite athletes had a fiery exchange on stage, which served to boost the excitement even more.

There has been a big rivalry between Bumstead and Ansley, stemming from their closely contested battle at the 2019 Olympia. Ansley was the two-time defending champ, but he got dethroned by Chris, who beat him by just a single point on the judge’s scorecards. While Chris seems to think that this is a sign of things to come in the division, Breon is refusing to go out without a fight. Both men have been looking unstoppable leading into this event.

As the weeks dwindled down, Chris Bumstead and Breon Ansley had been going back and forth in interviews and on social media. This came to a head when the two were at the press conference ahead of the 2020 Mr. Olympia. Here, each man staked their claim as to why they are better than the other, and explained why they will be victorious this year.

“Might I add, the stache is a little thicker this year,” Bumstead joked. “It was just more work (this year), to be completely honest. Last year was a learning process for me, and it was something that I didn’t feel like I was falling into my groove quite yet, and this year I really found myself. I got some advice from the champ himself, the GOAT, Phil Heath, and it was exactly what I’ve been doing this year.”

“It’s no mustache, it’s no ‘fro, it’ll be straight up physique, and a complete physique for sure,” Ansley responded. “I will respect the judge’s decision (from last year) and say that he beat me with probably three poses to my two, and that’s what it all comes down to as far the numbers are concerned. But I still feel my physique is superior. My physique is more dominant, and I have more of a complete bodybuilding Classic Physique.”

When asked how he could beat Chris Bumstead, Ansley’s answer was full of confidence.

“I get him everywhere,” Ansley explained. “Everywhere. I’m more complete. I have a more superior physique from head to toe, and it’s just about displaying it properly.”

On the other hand, Bumstead maintained the sentiments that he had been sharing since getting the win in 2019. He feels that his victory was just a sign that the division itself was moving in a different direction. Although Breon was quick to disagree with that.

“When I came in last year, and you asked me a similar question, I told you that Classic Physique hadn’t found someone who had set the standard of what it was meant to look like,” Bumstead said. “Because it was such a new division, it was searching for someone to be at the top, someone for the young kids coming up, that they want to strive towards, that standard Classic Physique look.

“So for everyone talking about Classic going in a certain direction, a taller direction, this and that, think about that,” Ansley continued. “I want you to think long and hard about that, and then the tides are going to turn again on Saturday night anyway, to a shorter classic competitor in Breon Ansley.”

It goes without saying that the rivalry between Chris Bumstead and Breon Ansley is shaping up to be one of the best in the history of the sport. It will be fun to see the next chapter of this story unfold this weekend, at the 2020 Mr. Olympia.