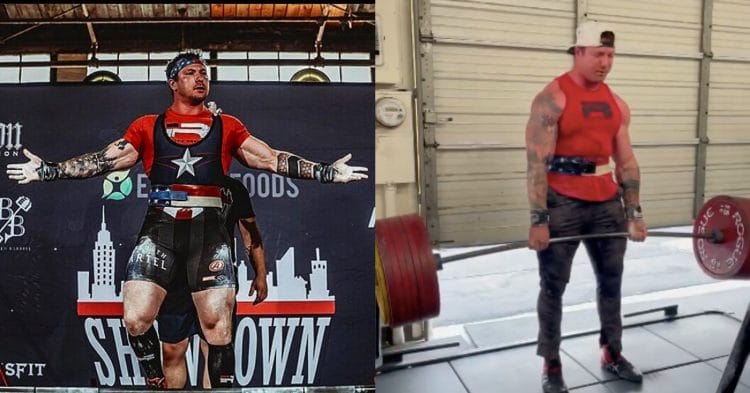 John Haack is looking to get back to action at the 2021 WRPF Showdown on September 25th-26th. Ahead of this contest, he scored a new personal record in the gym, proving that this will be a big competition for him.

The WRPF (World Raw Powerlifting Federation) Showdown will be the third meet of the year for Haack. The first two of these contests saw John struggling a bit with his deadlifts, going 3/6 overall across the two events.

That said, he has been hard at work in the training room, to make sure that he does not have any more issues like that. His most recent update to Instagram saw the 90kg powerlifter hit a massive 405kg (892lb) raw deadlift five weeks out from the contest, which was a new personal record.

Aside from the fact that this was a new PR for John Haack, this performance was impressive because it was an official world record for his weight class. If done in competition, it would surpass the 400kg record that Cailer Woolam holds, although it is worth noting that Cailer has pulled much heavier than that in the gym.

What also makes this interesting, is the fact that in his last meet, the Kern US Open, John struggled and missed two attempts to deadlift 400kg. So for him to surpass that, it seems like a certainty that he will have a career best performance at the WRPF Showdown.

Of course, he has not just been working on his deadlift gains, even if that is one of the most impressive things we have seen from him recently. A short time after doing the unofficial world record deadlift,  Haack took on the squat rack in order to pull off a strong 305kg (672lb) squat double, with a solid pause in between the two reps, which was impressive, even if he did not want to do it.

It is always exciting to see John Haack competing, and the 2021 WRPF Showdown will be no exception to this, especially after the way he has looked during his prep for the contest. It is going to be interesting to see if he can pull off the same deadlift in competition and secure the world record, even if for just a short time.