John Haack moved back down to the 90-kilogram weight class and set new Bench, Deadlift, and Total World Records. 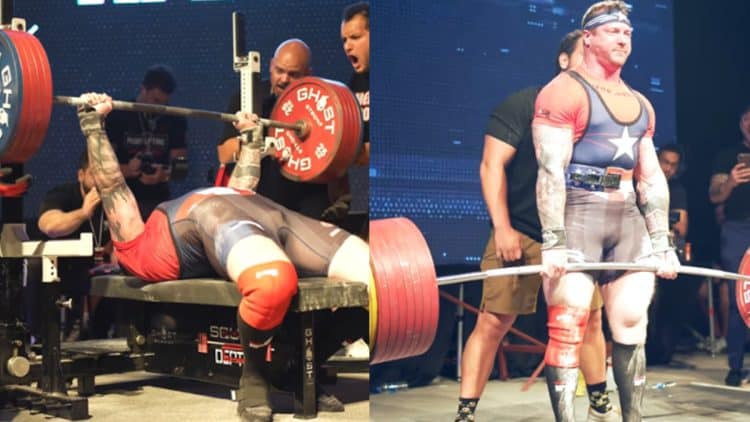 In preparation for the 2022 WRPF American Pro, John Haack posted some incredible lifts. As usual, a lot of his fans were hoping that he would be able to break some world records, as he is known to do. He didn’t disappoint and put on one of the best performances in powerlifting history. He won the 90-kilogram and overall raw division quite comfortably and broke three All-Time World Records.

John then followed that up with a massive 410-kilogram (903.9-pound) deadlift, which is also a new U90KG All-Time World Record. The previous record was also under his possession, as his 2021 WRPF The Bucked Up Showdown performance featured a 402.5-kilogram (887.4-pound) deadlift.

It should be noted that John Haack’s total came out to 1,022.5 kilograms (2,254.2 pounds), which was a record-setting result for him as he outperformed his previous record by 17 kilograms (37.5 pounds). He set the previous record of 1,005.5 kilograms (2,216.7 pounds) at the 2021 WRPF The Bucked Up Showdown as well. In addition, John Haack’s 1,022.5-kilogram (2,254.2-pound) Total is also significantly heavier than world records in the 100-kilogram and 110-kilogram weight classes, which are held by Haack and Jamal Browner, respectively.

John Haack’s bodyweight at the time of the 2022 WRPF American Pro was exactly 90 kilograms (198.4 pounds). Therefore, he had a perfect weight cut. Only one squat attempt was missed by Haack, which would also give him another World Record.

The 2022 WRPF American Pro was John Haack’s 25th sanctioned powerlifting competition. He has emerged victorious in 21 of them and now holds All-Time World Records in three separate weight classes.

Currently, John Haack is one of the most beloved powerlifters around the globe, with thousands of fans considering him to be one of the GOAT (Greatest Of All Time), and with performances like these, it is not hard to understand why. Furthermore, John is only 29 years old, so he still has a great deal of time left in this sport to get even more successful.