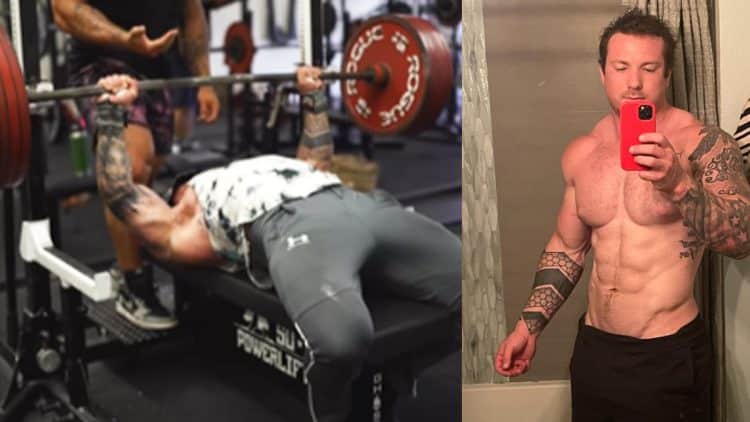 The activity of John Haack over the past few months certainly shows. He recently took part in the 2022 WRPF American Pro, which resulted in three World Records. Almost anyone would find that satisfying, except Haack. Instead, he returned straight to training in the gym and continued to work hard. That has now resulted in his greatest bench press so far, as Haack locked out 275 kilograms (606 pounds).

Although John Haack did bench press 600 pounds on multiple occasions, adding any amount of weight to that is impressive. However, it is evident that he is capable of doing even more, since this 275-kilogram (606-pound) bench press moved very smoothly. The lift was also raw, as John was only equipped with wrist wraps.

As he stated in the caption of his Instagram post, John Haack performed this lift as a part of his preparation for the 2022 USPA Pro Raw. This competition will take place on Sept. 24, 2022, in North Kansas City, MO, so there are still a few more days for him to perfect his technique. It is very likely that he will compete in the 90-kilogram weight class, but his current bodyweight is 98.4 kilograms (217 pounds). Haack is experienced with cutting weight prior to a competition, so it should not pose a problem for him.

Overall, John Haack has had one of the most successful powerlifting careers ever. Out of the 25 competitions in which he took part, Haack managed to win 21. Those include some very prestigious and difficult meets.

*John Haack set all of his competition PRs at the 2022 WRPF American Pro.

At 29 years old, John Haack has accumulated almost a decade of experience in powerlifting. While Haack still has a lot more time to improve, he is already widely regarded as one of the greatest powerlifters of all time.

Based on his new PR and a bodyweight of 98.4 kilograms (217 pounds), if he replicates this feat of strength at his upcoming appearance, John Haack will become the lightest man to officially bench press 600 pounds (272.1 kilograms) in a full-power competition. This achievement would even further solidify his title of the powerlifting G.O.A.T.

Hunter Labrada Discusses How to Train Best as Enhanced or Unenhanced: ‘Pick and Choose Your Battles’