John Haack scored the squat PR in the final heavy session of his prep for the 2022 WRPF American Pro. 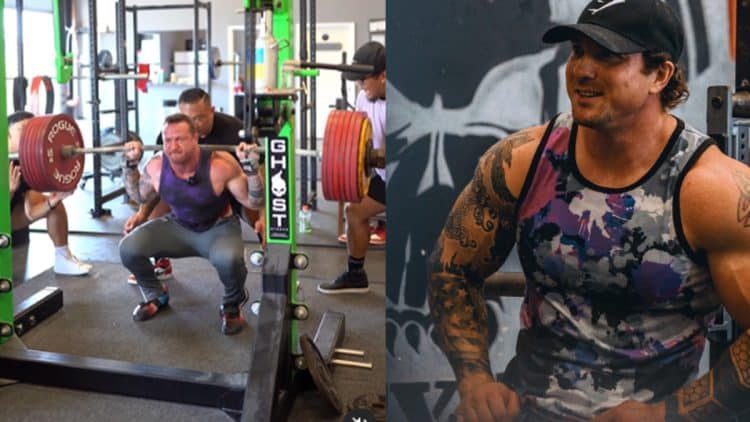 The greatest powerlifter in the 90-kilogram weight class, John Haack, is almost back to competing for the first time since January. Some powerlifting fans already regard John Haack as the G.O.A.T. (Greatest Of All-Time) in the sport, despite him still having a long career ahead of him. John is now backing up those claims with some of the most impressive lifts he has ever done.

John Haack will compete at the 2022 WRPF American Pro, which will take place on July 29-30, in Manassas, VA. With the competition being less than two weeks away, John performed his final heavy training session. The situation is looking really good for him, as he set a 365-kilogram (804.7-pound) squat PR to finish off his prep.

John Haack’s new PR is classified as raw by powerlifting standards, as he only used a lifting belt, and possibly knee sleeves underneath his sweatpants. Haack was using the high-bar squat technique, which is slightly less popular amongst powerlifters. His bodyweight at the time of the lift came out to 215 pounds (97.5 kilograms), but John hinted that he would cut down to the 90-kilogram (198-pound) weight class.

“And that wraps up heavy work leading into the American Pro. Body weight at 215lbs for a fun cut down to 198.”

At 29 years old, John Haack has amassed great success throughout his almost a decade-long career. He has taken part in 24 sanctioned competitions and won 20 of them. In the process of doing so, Haack claimed numerous World Records across multiple weight classes.

John Haack holds every World Record in the 90-kilogram weight class except the squat. However, that could change soon, as his 265-kilogram (804.7-pound) squat is equal to the current record. Amit Sapir squatted the same weight to set the record at the 2016 APA Elite Spring Challenge District 7 Regionals.

John Haack is one of the most famous powerlifters currently, and this is for a reason. Almost every time he steps on a powerlifting platform some records get beaten. Almost everything, after all, was conquered by John since it turned out to be only the squat that posed the greatest challenge to him. It is important for John to complete his collection and he is now edging closer to breaking a six-year-old squat record.