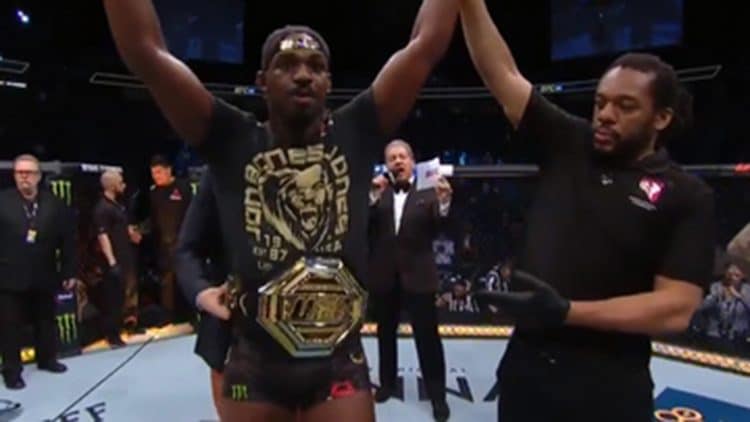 The Light Heavyweight title fight between the current UFC 205-pound champion Jon Jones and the former CCFC and VFC Middleweight champion Anthony Smith headlined the UFC 235 PPV (pay-per-view) event, which went down last night (Saturday, March 2, 2019) from inside T-Mobile Arena in Las Vegas, Nevada. The referee in charge for this contest was Herb Dean.

In the first round, fighters were trading shots, but Jon Jones remained dominant. We’ve seen two fantastic spinning back kicks to the body by Jones, who controlled the distance well. Smith delivered one big right hand to the opponent’s head.

The same thing continued in the second round. Jon Jones was dominant and he was landing various strikes. His rival was focused on the defense. Jones won the round, and his strongest strike was a big right hand.

The third round brought the first takedown in the match. Jon Jones totally dominated it. Smith was defending from north-south position. Jon was keeping his opponent on the fence literally all the time.

Jones dominated in the beginning of the fourth. Yet, Jones delivered one illegal soccer kick, but the referee Herb Dean didn’t warn him. Smith turtled, and Jon continued raining brutal blows.

But at the end of the round, the current champ delivered a dirty knee to the head of the grounded opponent. Herb Dean abducted two points from Jones and warned him he wouldn’t tolerate such things anymore.

A one-sided blowout continued in the fifth round. Smith was pressed against the cage, and Jones was purely dominating again. Shoulder strikes and knees to the thigh were simply too much for “The Lionheart”, who was waiting for the match to end.

Spinning back kick lands early in round 1 by @JonnyBones #UFC235 pic.twitter.com/8I3oH5JaoT

The champ is cut!@LionheartASmith lands a right hand that cuts Jones! #UFC235 pic.twitter.com/oULJtwfAQr

GOAT!!! Huge congrats @JonnyBones What a masterclass that was #ufc235

No argument. Best Cheater Ever. #ufc235

Anthony Smith could have potentially won a belt on that foul and didn’t . Respect #ufc235

Ok well I was wrong jones is just too good, Smith still in it but Jones too much

The king remains the king!
Congrats @JonnyBones on an amazing performance again! #GOAT

Yeeaaaaahhhh… it's time to give that belt a new home! Let me get a taste of @JonnyBones @ufc @danawhite @Mickmaynard2 #UFC235

Only competitive fight for Jones is DC.

Please give us your thoughts on the fight.

Arnold Classic 2020 Results For All Divisions