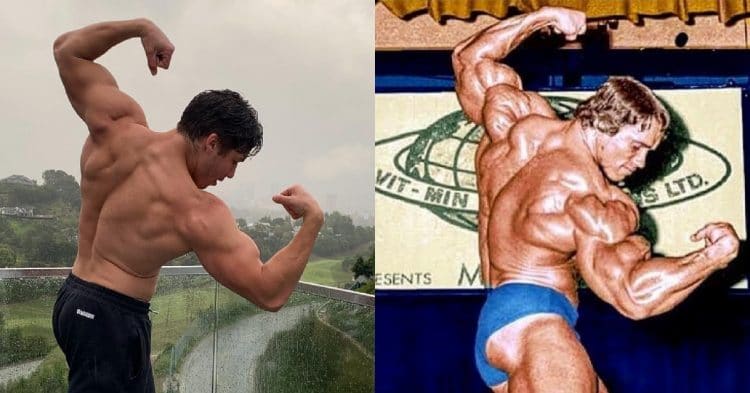 Joseph Baena likes to take after his father, Arnold Schwarzenegger, in a lot of ways. Now he recreated one of his dad’s most famous poses, and looked incredible while doing it.

With just one look at Baena, one can easily tell that he takes after his legendary dad in a lot of different ways. Not only do they look remarkably similar, but Joseph has begun to make waves in the bodybuilding world, much like his dad did many years ago. As such, he has worked with some pretty impressive people, training alongside some of the best in the world.

Unfortunately, with the current global health crisis, it is a lot harder for Baena to train with other bodybuilders right now. However he has not been deterred from working out at home. Not only that, but as he showed in a recent Instagram post, he figured now would be a good time to work on his posing skills. This led to him taking a picture doing one of the most iconic poses that his father was known to hit, during his peak, back in the day.

“Perfect time to practice some posing!”

The similarities between Baena and Arnold are staggering. This is not the first time Joseph Baena has been seen trying his hand at some of his father’s favorite poses. However, that does not stop it from being amazing to see, each and every time. Not to mention, this is perhaps the most iconic, as it was the pose that got Arnold onto the cover of Sports Illustrated.

Joseph Baena seems to have a ton of different posing skills, which he no doubt learned from his dad. However, he has started to make a name for himself, as someone more than just Arnold’s son. He wishes to eventually carve his own path of bodybuilding greatness. Nevertheless, fans will never get tired of seeing him doing the same things his father did in the 70’s and 80’s.