Joseph Baena Takes After Arnold With The Classic Challenge 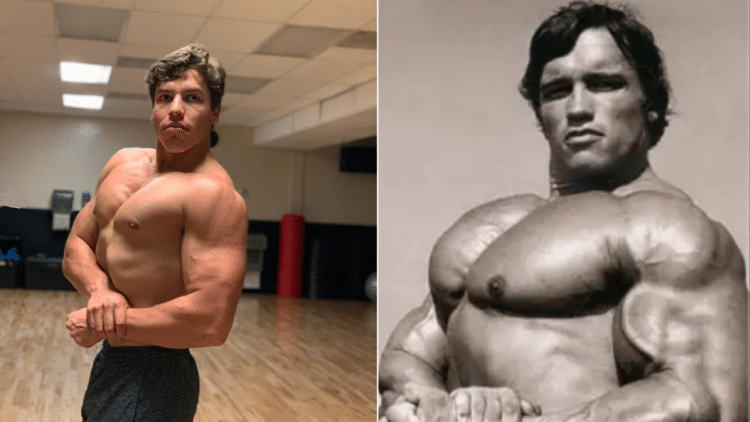 Joseph Baena is the son of the great Arnold Schwarzenegger. He appears to take after his father, after responding to a callout for the Classic Challenge.

Baena has been looking to follow in his dad’s footsteps, by trying his hand at bodybuilding. The young man has been spending the majority of his time in school, looking to earn his degree. However, he has not let this busy schedule keep him from the gym, and from getting big.

As a result, Baena is getting quite the physique. Therefore, when he was recently called out to take part in the Classic Challenge, it was interesting to see him respond. This challenge is aimed at bodybuilders, inviting them to do their best classic poses. He was called out by Classic Physique bodybuilder Dakota Sinson, to take part in the challenge. Once this happened, Joseph was unable to say no, so uploaded his answer to this challenge.

Baena looks quite impressive with his posing. In fact, he mirrors his father in a lot of ways. Arnold is widely regarded as one of the best bodybuilders of all time. Subsequently, he is considered to be the one to look at, when trying to find the ideal physique. Therefore, seeing Joseph Baena strike these poses makes one feel like they are looking through a time machine at his father.

In addition to looking impressive himself, Baena calls out fellow bodybuilders Matt Kirma, Zach Andrews, and Bradley Martyn. It will interesting to see if they follow through with this callout, and keep the challenge going. This is certainly a fun thing to be brought to the bodybuilding community.

It is unclear whether or not Joseph Baena will fully pursue bodybuilding after college. However, if this classic challenge is any indication, he very well could be successful if he chose to follow in his dad’s footsteps.