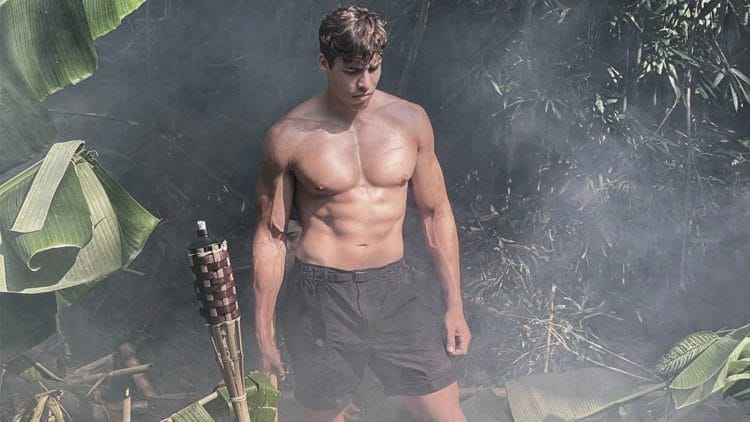 We all inherit some traits from our parents and Arnold Schwarzenegger’s Son Joseph Baena has inherited the love for bodybuilding as well as acting. Baena regularly trains at the Gold’s Gym in Venice Beach, California, and routinely posts updates about his bodybuilding journey on his social media accounts. The 24-year-old is also working on making a career in acting and recently shared a photo that shows off his sculpted physique.

Joseph Baena is currently shooting for the movie Lava which is believed to be the first fully cryptocurrency-funded movie. Baena posted a shirtless photo from the movie set on his Instagram account. Clicked in a forest setting, the photo displays Baena’s well-built chest and arms.

“Excited to be filming the movie “Lava” with the @bitflixnfts team! Comment what you think is happening in this scene,” Joseph Baena wrote in the caption.

Baena recreates many of Arnold’s iconic bodybuilding poses in his Instagram posts. The father-son duo frequently trains together and the 24-year-old cites training with his father as the ‘ultimate experience’ while admiring his work ethic. Joseph Baena and Arnold Schwarzenegger hit the gym together after the gyms reopened in late 2020. Baena posted a post-workout photo of them together and shared his thoughts on training with Arnold.

Joseph Baena’s recent shirtless photo resembles some of the shots from Arnold Schwarzenegger’s iconic film Predator and reminds us once again about the similarities between the two.

Joseph Baena is pursuing a career in real estate

The early twenties are the best time to explore career opportunities and Joseph Baena is doing the same. Pro Joe is an avid bodybuilder and has expressed his desire to compete professionally in the past. He has also inherited his father’s love for acting and has appeared in several small projects. However, apart from bodybuilding and acting Joseph Baena is also trying to build a career in the real estate sector.

Earlier this year, Joseph Baena announced that he has started a new career as a realtor. Currently, he is working with his team Aria Properties. Most of Baena’s Instagram posts revolved around fitness and bodybuilding. However, his recent posts shed a light on his busy routine and a different approach to everyday life.

Whether it’s acting, bodybuilding, or real estate, Joseph Baena seems to be working towards a successful career. It will be interesting to see which one he excels the most in going forward.