Joseph Baena looks like the spitting image of his father, Arnold Schwarzenegger, as he hits a variety of old school bodybuilding poses 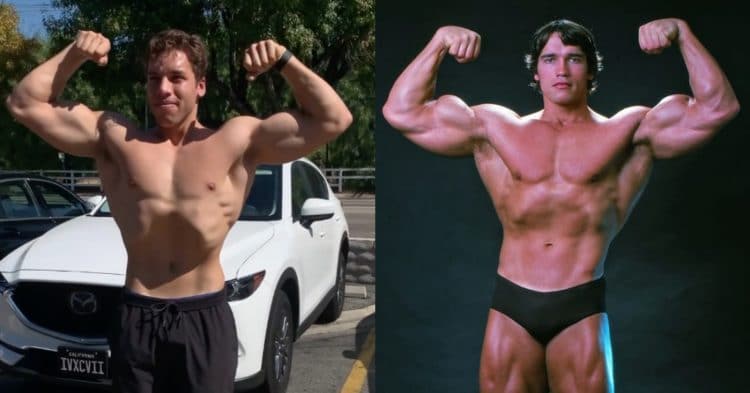 The progress of Joseph Baena over the last few years has been absolutely incredible. His most recent update sees him seeming to channel his father’s energy in a big way with some poses right out of the Golden Era of bodybuilding.

As the son of bodybuilding legend Arnold Schwarzenegger, there is a lot of pressure on the shoulders of Baena, as he prepares to make his debut in bodybuilding. He has previously been open about wanting to compete as a Classic Physique bodybuilder, and has been training hard accordingly. Along the way he has shared some really solid physique updates that look to be the mirror image of his father, getting fans buzzing each and every time.

This only continued with the most recent update that Joseph Baena posted to his Instagram. Here, the 23 year old can be seen hitting a variety of poses, each of which include an element of the vacuum in them. This aesthetic is right out of the Golden Era of bodybuilding, and these classic style poses draw a comparison between Joe and his father, whether intentionally or not.

“Teaching the boys a lesson in posing. Side chest or the 3/4 pose will always be my favorites. What are yours?”

If you are a fan of old school bodybuilding in any way, you can appreciate what Baena is doing here. His physique seems to be coming along, as a result of all of the hard training that he has been doing in the gym. As this happens, it is increasingly apparent just how much of his genetic talent and muscle structure that he got from his father.

Currently, Baena has not revealed when he plans on competing for the first time. That being said, it is clear that he wants to have a well rounded and relatively complete package when he does make that long awaited debut, and understandably so given the weight of the name he carries with him. Every time he shares a training video or update, it is clear that he is working on training each part of his body as often as is necessary to improve, and the difference over the last year or so has been stark.

There is so much interest in seeing what Joseph Baena can do as a bodybuilder, and it is not hard to understand why. As previously stated, there is no word on when he will finally compete, but it is clear that a lot of eyes will be on him.

Women’s Powerlifting: What You Need to Know to Get Started