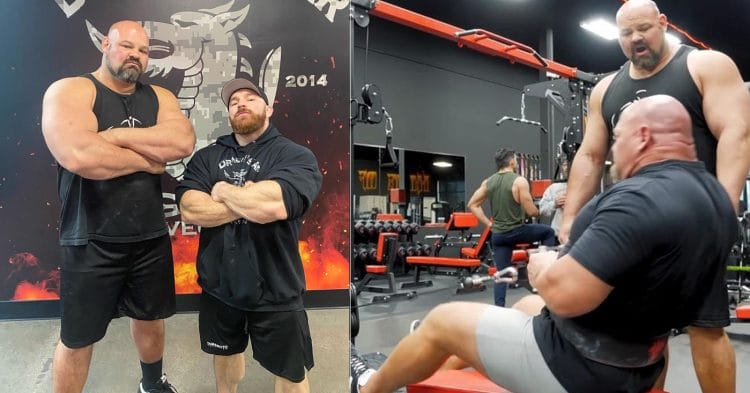 Despite being one of the most accomplished athletes in the history of strongman, Brian Shaw does not shy away from partnering with people from different walks of life and learning new things. Be it fight training with Dustin Poirier or joining hands with fellow strongmen Eddie Hall and Robert Oberst, the four-time WSM winner goes through all the training sessions with a playful demeanor and makes it a point to share the insights with his 1.7 million YouTube subscribers.

It was Brian Shaw’s first visit to the Dragon’s Lair and the 39-year-old allowed Nick Best to lead the session as the latter was more familiar with the set-up. The workout session came to fruition as Nick Best wanted to try the pre-workout supplement from Undefined Nutrition, the supplement brand owned by Brian Shaw, and give his feedback.

The duo started the workout session with isolateral double-arm plate-loaded rows. Nick Best explained that the exercise allows getting more extension and works the middle-upper back region or traps.

Both men performed 5 sets each of 10 reps with progressive overload before moving on to the next one. Nick Best revealed that he prefers to work only the target muscles during any workout. He then opted to use straps from the second set onwards to avoid working the grip strength on a back day. Brian Shaw, however, disagreed and only used chalk instead.

The machine used in the workout was isolateral, meaning that its lever arms worked independently of each other. This allows the user to develop the strength to stabilize the spine for activities such as picking things up off the ground. Nick Best went on to highlight its importance particularly for strongmen and stated:

“It helps with Atlas stones. Pulling the Atlas stones off the ground and it also helps you good.”

“It helps, like, when you’re doing deadlift for reps and stuff like that – you get used to pushing through a high number of reps. Plus, it’s really hard to load the cable machine as heavy as we need it. So (we need to perform more reps),” Nick Best explained.

Nick Best and Brian Shaw took their turns to finish two sets each of 20 reps and moved on to close grip lat pulldowns.

While explaining the logic behind adopting this variation of lat pull-downs for strongman sports, Nick Best stated that the negative phase of the exercise mimics the movements employed in events such as Atlas stone.

“It’s good. You want to pull and get it into your chest. It works in the Strongman more because of the things that we do and the way we got to stay tight like when you’re coming here (lifting the atlas) stone, you’ve gotta pull the stone back up to lift it in the air. This is when you’re pulling down this way, the movement’s very similar,” Nick Best explained.

The pair went on to perform two sets of close-grip lat pulldowns with 8 to 15 reps in each set. It was followed by one set of wide-grip lat pulldowns. A brief interaction with Flex Lewis later, Nick Best led Brian Shaw to the finisher of the day.

Nick Best ended the upper back workout session with a set of band pullovers. Similar to traditional dumbbell pullovers, the workout allows a wider range of motion and greater muscle contraction.

“When you do the dumbbell pullover and stuff like that, even though you bring it up to here, you stop pulling about here. (Arms parallel to the ground) The leverage is different. These, you pull with the band, pull all the way down to here. (Arms almost perpendicular to the ground) So you get much longer and deeper muscle contraction. It works well.”

After going through the workout, Brian Shaw acknowledged that the entire session provided a good day’s work to the upper back muscles and thanked Nick Best for the workout before the video ended.

After a series of strong showings in 2021, Brian Shaw finished seventh at the inaugural strongman competition at the 2021 Rogue Invitational due to a hamstring injury. The four-time WSM winner is in the recovery phase after receiving an A2M treatment recently. If the recovery process goes as expected, the 39-year-old will be able to present a formidable challenge at the 2022 WSM contest that is expected to take place in August 2022.

Courtesy of Brian Shaw’s YouTube channel, you can watch the full video of his workout with Nick Best here: