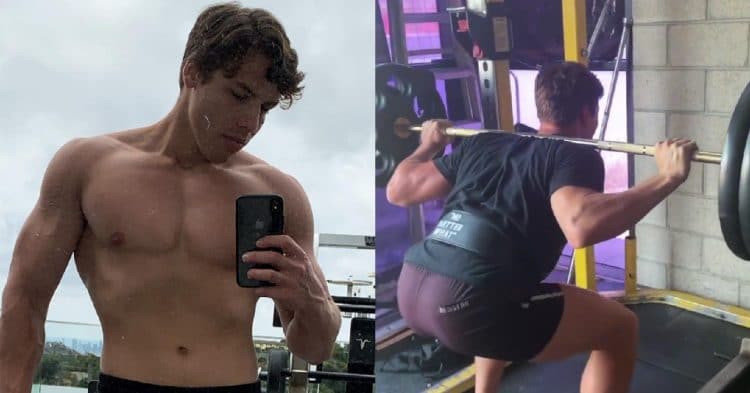 When it comes to hard work, it is no surprise that the son of Arnold Schwarzenegger, Joseph Baena has the ability to deliver this is spades. He showed his determination again recently, with an intense squat session in the gym.

Over the years, Baena has shown time and again that he is an ultra skilled athlete, who clearly takes after his father. While he is always looking to pave his own way, he is no stranger to emulating the poses and techniques that Arnold used in his prime. This type of look and connection to the bodybuilding legend is what has brought fans in, but Joe’s hard working mentality and drive is what keeps people interested.

Usually Joseph Baena is not one to share a ton of workout videos on his social media, but when he does it is always worth checking out. This was the case recently, when he took to Instagram to show off his intense squat training session. Moreover he takes a minute to reflect on his growth and progress in his legs over the last few months.

“Happy with the improvements I’ve made in the last couple months! Legs getting thicker and stronger. Let keep it going!”

Joseph has every right to be proud of his growth lately, because he has been clearly working hard to improve. It is more than just his legs that are improving too, as he seems to be bulking up all the way around. A few weeks ago he did a workout shirtless, and it did a great job to show the massive size of his upper body, in particular with his enormous chest. It easily looked comparable to the roundness of his father’s chest back in the day.

Now that his legs seem to be coming along to the rest of his body, it seems that Joseph Baena is gearing up for his long awaited move to bodybuilding. Even with the genetics he has, there is still a ton of work that goes into turning yourself from just generally athletic, to stage ready. While there is still a ton of work to do, and he has not said when he plans to make his bodybuilding debut, he is clearly hard at work to get his physique where it needs to be. It will be exciting to see him compete eventually, and fully put his body to the test to build his own legacy in the sport.