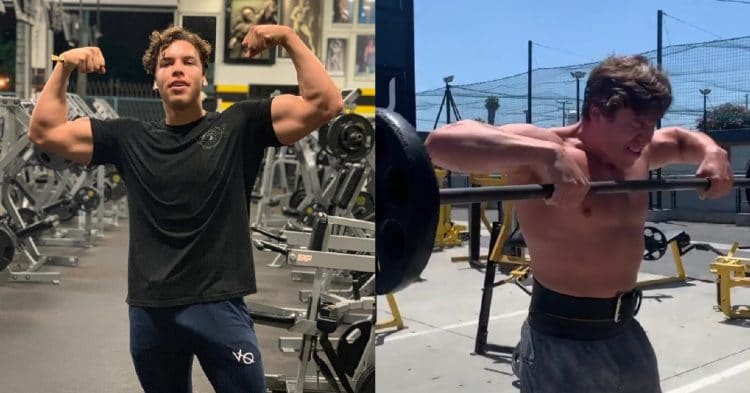 The more time that passes, the more Joseph Baena seems to have in common with Arnold Schwarzenegger. This was perhaps most evident when he went through a recent training session.

As the son of the bodybuilding legend, Baena entered the fitness world with a high degree of scrutiny. However he is constantly living up to those expectations, without having even competed yet as a bodybuilder. He has a close relationship with Arnold, and is often caught mimicking his father’s iconic poses, from back in the day. Not only that, but he has started relationships with other big and iconic figures in the community, regularly being seen working with others.

Most of the time, Joseph Baena does his training inside Gold’s Gym Venice, but he has been left to work out on his roof the last few months, with gyms being closed down. Although his facility is back open, Joseph recently chose to enjoy a beautiful day by getting a pump in while outside. He took to his Instagram recently to share his training session, where he looks jacked doing some upright barbell rows.

While this is not exactly the best exercise to work your delts, it seems to be working well for Baena. That being said, what makes this session so interesting to see, is how much bigger he looks, clearly packing on the size. He has been slowly adding on the muscle, and it looks like his physique is beginning to get better. Of course, this is to be expected, when you consider the people that he has been working with, and how much time he spends grinding away.

The list of people that Joseph has trained with is increasing in length all the time. He has shared the gym with the likes of Sergio Oliva Jr., and Mike O’Hearn, not to mention his father, of course. This variety in training partners has allowed him to quickly learn the skills needed to properly build his body, and now those results are starting to show themselves.

There is no denying that Joseph Baena is incredibly gifted, but he is clearly always working diligently on his craft. Right now, he may have largely made his impact from being the son of Arnold Schwarzenegger. However it is going to be interesting to see how much he can carve his own path, if he puts his entire focus into bodybuilding.