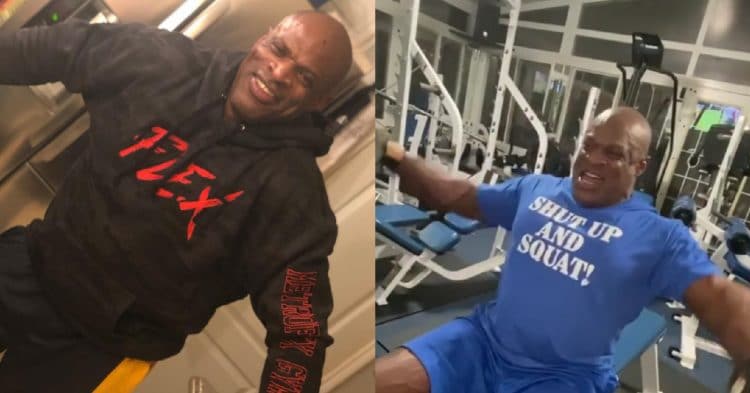 It is always a treat to see Big Ronnie Coleman working hard in the gym. He gave a glimpse of that recently, with an early morning session to work out his shoulders.

As an 8-time winner of the Mr. Olympia, it is no wonder that Coleman is such a major icon in bodybuilding. He has spent the last 25 years building a resume as one of the greatest to ever do it, and has therefore built a long lasting legacy in the sport. He has even gotten the respect of WWE superstar Hulk Hogan, as the two have joked about wrestling each other, while sharing stories of their numerous respective surgeries.

With this type of fanbase, it is always motivating to see Ronnie Coleman in the gym and working hard. This happened again recently, when Big Ron posted to Instagram, during an early morning shoulder session. Getting to the gym just after 4am, he shared a set of 22 lateral raises, while reminiscing about coming back and winning the 2003 Mr. Olympia.

“It’s the late night workout at Big Ron’s gym or shall I say early morning workout since it’s 4:12am. Showing off the new @colemanathletics clothing line and this morning I’m highlighting the old “Shut up and Squat”.

This shirt was my motto in 2003 while filming “The Cost of Redemption” DVD. I called it “The Cost of Redemption” because I was trying to prove to myself and everyone else who thought I was on the decline because 2002 Olympia placing and showing wasn’t that convincing that I was gonna win in 2003. That’s when I went crazy in the gym lifting unbelievable heavy amounts of weights including an 800 pound squat for 2 reps. I could have gotten 5 but I had 2 in my mind because I had already deadlifted 800 for 2 reps. Anyway I’m going off course here.

The new @colemanathletics clothing line is available at ronniecoleman.net or you can just go to the link in my bio….Yeah Buddy….Lightweight Baby”

It is not at all uncommon for Ron to train at this time of day. He seems to really enjoy the peace and quiet during this time. Sometimes he will even bring his daughter along with him, to cheer him on during his workouts, even if it is in pajamas.

No matter what he is doing, it is always fun to see Ronnie Coleman hitting the weights. The fact that he is still motivated enough to go to the gym at 4am speaks largely to the character that allowed him to be the GOAT.