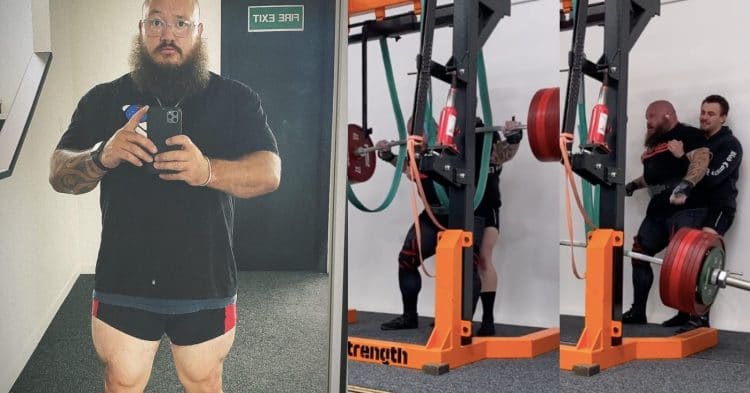 We have said it countless times on this website, any time you look to push your strength to the limit in the weight room, always bring a spotter. Powerlifter Joseph Whittaker was certainly happy to follow this rule after he narrowly avoided a potentially life-ending gym accident.

Hailing from New Zealand, Whittaker is a powerlifting veteran of nearly a decade. He has largely competed in regional events, in the +120kg weight class, coming first or second at every meet he appears in.

However he almost faced an injury that could have likely ended his life, or at a bare minimum put him on the sidelines for a while with severe injury. He posted a video to his Instagram, where he was seen trying to squat 400kg, which would have exceeded his competition best by 17kg, but this was apparently too much for him, as he started to buckle under the barbell, and had to toss the weight and back away.

“Alright team,
SOUND ON, the share violence of this is mind baffling and the monolift is the safest thing I’ve squatted in, after unracking 400 my knee snapped back batter in the wrap which made me loose balance and well I done my best to scrap it the end result and safest option was to dump over my head unfortunately fucked a squat bar 🥴🥴” Whittaker wrote.

In the video, you can see Joseph immediately struggling from the moment he pulled the weight off the rack. Luckily his spotter saw that too, and helped to brace him right away, catching him after the weight was tossed, even checking to make sure he did not get a cut on his head.

While this was higher than his competition best, Joseph Whittaker was not pushing beyond what is a reasonable weight to squat. That said, he was unable to handle it with that session and was clearly saved from a serious injury with the help of his spotter.

In fact he proved just a day later that this was just a bad lift, by squatting 402kg successfully. It was still a battle for him to hit it, but it showed that he was not interested in giving up just because he had one failed lift.

It is genuinely good to see that Joseph Whittaker did not get hurt from this failed lift, and was able to squat even more the next day. That is a level of determination that most only wish to hold.