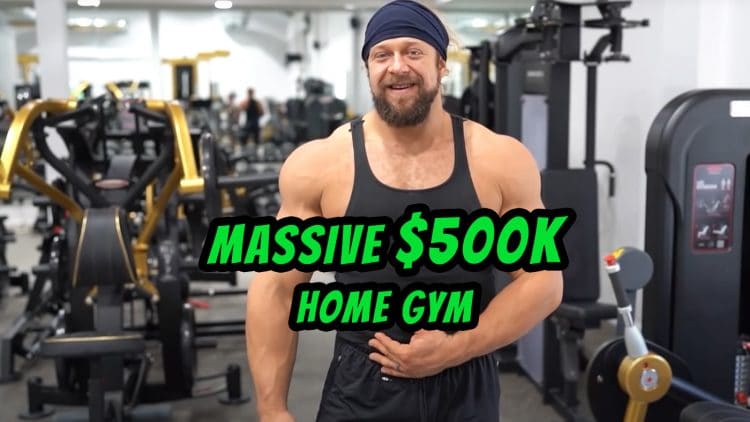 Brian Shaw’s monstrous home gym just got some serious competition as Jujimufu has entered the “massive-home- gym-that-is-equipped-better-than-most-commercial-gyms” market with a bang.  His massive gym has everything you could imagine and when I say “everything” I mean, everything.

From specialized bodybuilding equipment, I didn’t even know exists all the way to a literal urinal.  Disclaimer: I’ll try to do my best to catalog his gym without boring you to death, but this should be lengthy. Now, with the disclaimer out of the way, let’s see what the self-proclaimed “poly-athlete” got.

Let’s start this list off with the gym essentials; racks, barbels, and plates.  A normal home gym would have an “everything” barbell, a “jack of all trades” if you will that you use for everything that requires you to use a barbell.

But “normal” is not part of Jujimufu’s dictionary and as such he has; the first barbell he ever used(his old gym gave it to him), Kabuki strength’s kadilak, duffalo, and safety squat bar, various Texas power bars (each specialized for one of the three powerlifting categories).  With all that, he also has a Viking press implement with the “landmine” attachment.

Since this is the powerlifting section of his gym, a squat rack is a must-have. Juji armed himself with a very fancy-looking powerlifting monolift, and a combo rack with a pull-out competition standard bench. Alongside all of this, Juji also has a chalk bowl and a wall with a bunch of weird-looking grip implements designed by the man himself with the goal of getting your grip strong and test your awkward lift strength.

Since Juji is best known for doing some crazy ninja flips and tricks, this section is specifically designed so he can get his inner kung fu master the space it needs to air out his frustrations and needs. It’s the same kind of matting Olympic gymnasts use when they perform on their platforms. It’s designed so you don’t kill yourself while performing an insane flip or jump.

I must say, his bodybuilding section is probably the most impressive collection of specialized gym equipment I’ve ever seen. I know, I’m not the “gold standard” of judging fitness equipment and home gyms, but I’ve seen a lot of stuff,  and Juji’s bodybuilding section is something else. That includes real-life, Instagram, promo pictures, and youtube. Jujimufu has found some really great-looking equipment that I’m sure is a blast to work out on.

He has the obligatory gym standards; dumbells rack that goes up to 150lbs, giant cable cross machine with a lat pulldowns and triceps/biceps pull down cables, at least 5 different chest press machines, shoulder press machines…the usual. He also has a set of mobile gym mirrors that gave me serious Bruce Lee/ “Enter the Dragon” flashbacks.  If all that wasn’t enough he also has a decline dumbbell bench with a built-in dumbbell stand/rack.  He also has the same thing but on a shoulder press station.

On top of all that he has one of the coolest, most expensive-looking machines I’ve ever seen.  It’s a decline bench with a sort of pyramid-shaped smith machine system but it’s both bilateral and unilateral. Which means you can work one arm at a time or both arms at the same time. If I saw this in a gym nearby, I’d sign in just for that piece of equipment alone.  With all of that….he still has a bunch of biceps-based machines and various pull-based machines. He has literally thought of everything.

As an aspiring bodybuilder and powerlifter (among the dozens of other things he does) Jujimufu doesn’t skip leg day. So, his leg day collection of equipment is equally impressive as his upper body collection of equipment.  Vertical leg press, pendulum squat machine, calf press machine(yes, press), seated calf raise machine, hip thrust machine, power squat machine, standard leg press, at least 4 hamstring machines, and God only knows what else.

Finally, we are reaching the end of his epic home gym that appears to have everything for a human individual with an interest in fitness.

I’m kinda let down at how basic his cardio equipment is. I was expecting giant hamster wheels, some high-tech VR-based treadmill that lets you log into The Matrix, a Sayian hyperbaric chamber, or some of the equipment Ivan Drago used in Rocky 4. However, to my mild disappointment he “only” has a regular treadmill, a stair master, elliptical machine, assault bike, and a concept 2 rower.

I’m sure I missed a few things along the way because maaan. He really didn’t spare any expenses with the budget. He poured half a million dollars into brand new, high-end, top-quality gym equipment. He even has a basic kitchen and a bathroom that’s equipped with a urinal.