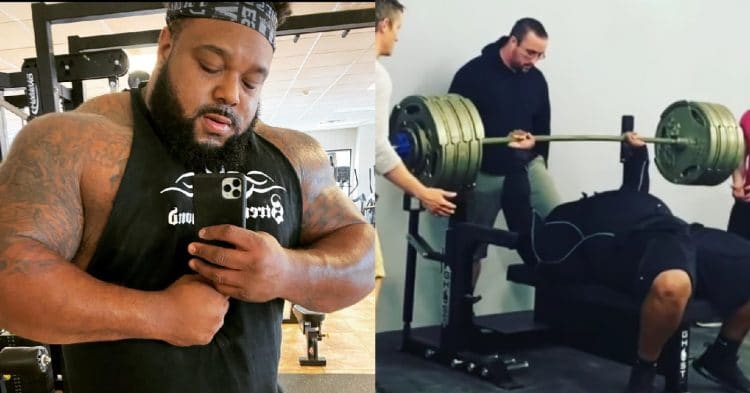 At this point, Julius Maddox is synonymous with unbelievable bench presses. However he took a second to reflect on how far he has come, during a recent training session.

Maddox has his sights set on scoring an 800lb bench press world record. As of right now, the plan is for him to attempt this lift on June 27th, as part of the World Ultimate Strongman Feats of Strength series. If successful, he will etch his name in history as one of the greatest powerlifters of all time.

In the efforts to prepare for this epic lift, Julius Maddox has been doing a ton of work. His most recent post to Instagram showed that in a big way, as he managed to tear through four reps of a 705lb bench press. It was a masterclass of benching skills as he set a new personal record, and showed how much effort he has been putting in to achieve his goal.

Julius explains that the this size bench press used to be his max. Now it is relatively easy for him, as he has grown and improved, getting closer to that 800lb mark. He still has some work to do before he gets there, but he has already gotten tons better.

As the weeks tick by, Julius continues to make improvements. Here he is, just a week earlier, going six reps on a 655lb bench press. Comparing the two bench sets, you can see that he is able to go 50lb heavier, for almost the same amount of reps, and it is just as easy for him.

There is just over a month until Julius Maddox is set to attempt his world record bench press. There is still a lot of work to do until then, but it is clear that he is motivated to reach this massive goal.