Julius Maddox and Larry Wheels trained together, which saw Julius hit a 735lb bench, but fail a 790lb attempt 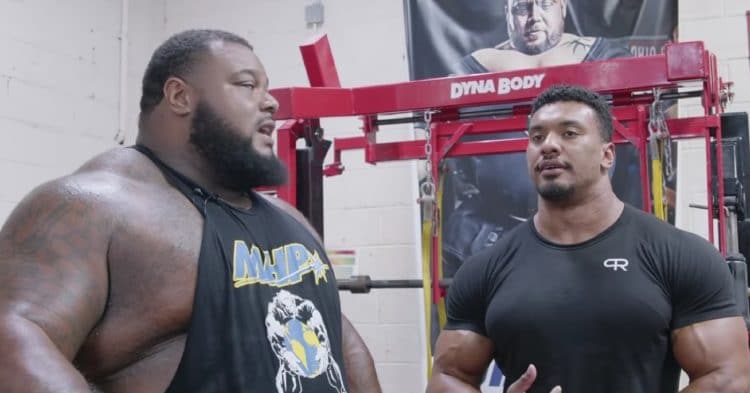 Julius Maddox is known for his massive bench press skills, with an 800lb world record attempt around the corner. Ahead of this attempt, he hit the gym with Larry Wheels with the two putting up some serious numbers.

Maddox is looking to make his second attempt at an 800lb bench press later this month, after a misloading incident derailed his first attempt. He has been putting things together during his training, and seems ready to make this massive attempt.

Prior to this, Julius hit the gym with the personal record wrecking machine himself, Larry Wheels, with both men posting videos to their YouTubes. The two shared some trade secrets and tips as they worked towards hitting each of their one-rep maxes.

“What’s your best lift, that you feel just comes naturally to you?” Maddox asked Wheels.

“Bench for sure. Yeah, definitely, bench for sure. Second for that would be probably deadlift, and squat last,” Wheels responded.

“Okay. Mine would be bench, bench, and bench,” Maddox said, with a chuckle.

The two hit the dumbbells with some warm ups, before doing some light benching for reps. They discuss the difficulty of finding the balance between not warming up enough, and warming up too much, before going for heavy weights.

Right before Julius Maddox does an “easy warm-up” of 515lb on the bench, he makes it clear that he is looking to attempt a 790lb press during this session. He seemed pumped up to make this attempt.

“Lift heavy or die trying I guess,” he said.

Maddox and Wheels take turns finishing their warm-ups, with Julius giving Larry some tips on how he can improve his speed and form. They discuss how even when people say something on social media, it is still worth checking out what they are talking about, just to make sure everything is perfect.

Then Julius loads the barbell with a strong 735lb, which he says is relatively close to where his average is at the moment. He hit this weight smoothly, making it seem like the 790lb attempt might be a lock.

The anticipation in the room was heavy, as 790lb was loaded onto the bar. With the help of Larry Wheels and a few other spotters, Julius Maddox took the bar down and began to lift it in a smooth way, but unfortunately his left side started to dip, forcing the spotters to help him lift the bar, resulting in a failed attempt.

“Well, it is what it is. We’re two weeks out. We’re going to have to adjust. It was 790. Man, that sucked. I definitely flared out way too early. I could feel it pulling.., it was too much on my upper pec, I already knew it,” he said.

“This is tough. Because when you’re two weeks out from a meet and you miss a lift, you’re going through your mind thinking ‘What am I not doing right?'” Maddox added.

As understandably disappointing as this was for Julius Maddox, Larry Wheels and the rest of the team were nothing but supportive of him. He has about two weeks to make the proper adjustments, before his 800lb world record attempt comes along, and if anybody can make the right changes, it would be him.