After a misload on the first attempt, Julius Maddox failed the second and didn't attempt a third. 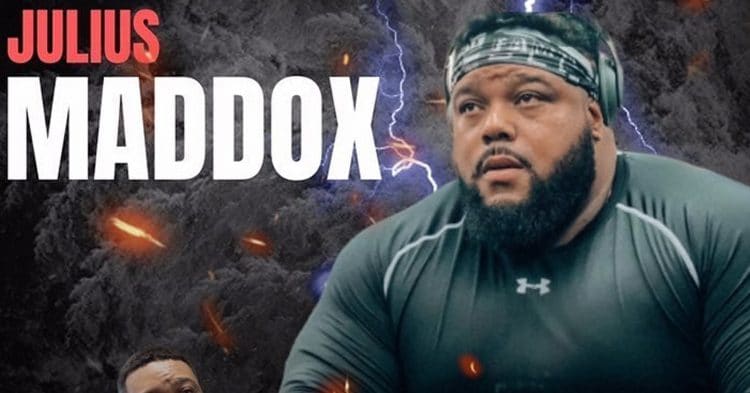 As part of the World’s Ultimate Strongman Feats of Strength series, Julius Maddox looked to improve upon his world record bench press of 350kg/770 lbs at the East Race Muscle Gym in South Bend, Indiana. He achieved 770 lbs back in March at the Arnold Sports Festival after having steadily progressed since first breaking the all-time raw record back in September, easily locking out 739.6 lbs.

But as insane as his previous accomplishments were, nothing could compare to the other-worldly amount of weight that he’d attempt this time around… 363kg/800lbs! That’s 30 pounds more than his current record and 10 pounds more than the 790lbs he attempted three weeks ago of which he failed to complete.

So Maddox had been training and preparing for this historical feat as his legacy depended on it. He opened with 722 pounds (327.4 kg) which you’d imagine went up smoothly for the bench press king.

But then when it came time for his first attempt, they noticed that the bar was loaded unevenly (extra 25kg plate on one side) which threw him off.

He then gave it another try with the correct weight on the bar and although he got close, his left arm wasn’t following as planned. As a result, he has assistance to re-rack the bar and was injured in the process. Consequently, he opted out of a third attempt.

In the interview afterward, he explained…

“I was very optimistic, I felt great leading up to this. A very positive mindset, you know, things like this happen“

When asked what’s next, his response was…

“This journey is going to carry on. I’m going to lose some weight, come back stronger, and next time I hit the stage next year or the end of this year, 800 is not even going to be a number no more, we’re going to be looking for the next number.”

Maddox wasn’t the only one scheduled to perform today (although he headlined the event), as there were several others who had an opportunity to achieve amazing bench press feats as part of the “Beasts Of The Bench” event.

These names include Tom Davis, Johnnie Harris, Perseus, Tony Sentmanat, and James Dollman. But you can watch the video to see their attempts as well.

It was an unfortunate experience for Julius Maddox today but he’ll be back and there’s no doubt he’ll achieve the 800lb bench press in due time and hopefully, under better circumstances.