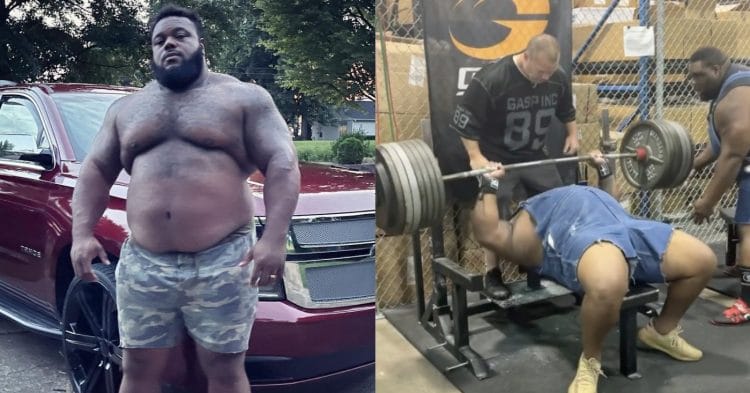 The road to Julius Maddox taking his next stab at an 800lb bench press is about to come to a head. With this drawing closer, he hit a new personal record in training, with a massive bench press double.

Last month was the originally scheduled second attempt at an 800lb bench, but when Maddox failed a 720lb bench in training, he got injured and was forced to delay things. At the time of writing, he has yet to announce a date to try this never before seen lift again.

However it is clear that this will be soon, if his recent training sessions are any indication. In a recent post to his Instagram, Julius managed to pull off a massive 750lb press in training, doing it for a staggering two reps, and setting a new PR and proclaiming his readiness for 800lb in the process.

Lost traction on the second rep so I racked it for safety. I’m officially ready for 800.. ” Maddox wrote.

What is crazy about this bench press, it not just the fact that Julius was able to do it for two reps, but that he may have even had more in the tank. In the post, he claimed that he only re-racked the weight because he was losing traction on the bar, not necessarily because he was tired.

It is nice to see that Julius Maddox has gotten back in the saddle in a big way since failing on that 720lb press in May, and the minor bicep injury he suffered. This is a clear step in the right direction, and he says that he is ready for the 800lb attempt.

Of course, he has Iranian powerlifter Danial Zamani hot on his tail, after a massive bench press of his own, earlier this week. That said, if Julius can be the first human to bench press 800lb raw, then there is no denying his place in history.

Time will tell when Julius Maddox finally decides to make another attempt at this groundbreaking bench press. Hopefully whenever it does go down, there will be no outside forces tampering with his skills, as was the case with his first attempt.

Julius has made it clear that 800lb is not the final goal for his bench press, and with such hot competition on his tail he will be even more motivated to add as much weight as possible. The first stop though, is at 800lb.