On the road back to his 800lb bench press attempt, Julius Maddox destroys a huge 750lb bench and makes it look effortless 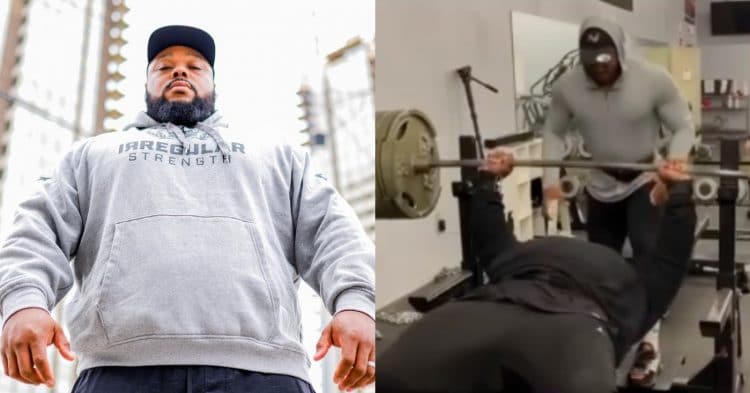 It seems like things are getting close again to the 800lb bench press world record attempt of Julius Maddox. This was seen in a massive way as he blew through a huge bench session in training.

There is no argument in saying that Maddox is one of the strongest powerlifters in the world today. At a bare minimum, you cannot deny that his bench press skills are unparalleled.

He has been spending the last year or so really making a push cement that status by becoming the first person to bench 800lb. He even tried to go for the world record, but a misloading incident led to an injury and him failing the attempt.

Since then, Julius Maddox has been hard to work to rebuild and get back to this pinnacle. He has been doing all kinds of crazy sets, from massive marathon sessions, to huge top singles.

Most recently we got to see Julius back in the gym hitting a huge 750lb bench press. He uploaded the video of the training session to Instagram, and you can watch how easily he made the weight move.

This was an impressive performance from Maddox without a doubt. He seems to be looking even more prepared this time around, as he begins amping up towards the 800lb goal that he has in mind.

There have been a lot of similarities between the training regimen he is following this time around, versus when he tried the world record last time. However he has also been doing some things differently, which seems to be leading to good results.

One crazy moment that we got to see from him recently, was when Maddox did a static hold with 815lb. This is more than the world record, and he is just getting a feel for how that weight is in his hands.

While this is still far from the 800lb bench press actually coming to fruition, Julius Maddox seems to be clicking on a new level with this training. He has not yet set a date for his next attempt, but it seems like it will be soon.

Obviously nothing is a sure thing, as we saw with the first world record attempt, but he seems to be handling weight even better now, than he did the first time. It makes things exciting as we wait to see if he can etch his name in history books forever.