The all-time raw bench press world record holder shares details about his rough past and looking forward to achieving an 800 lb bench press. 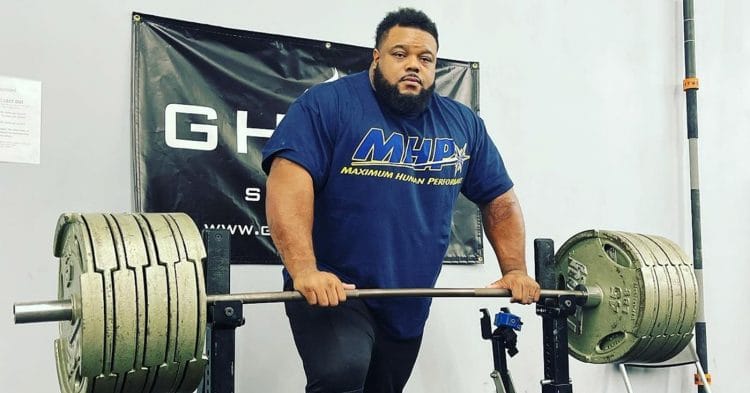 Julius Maddox is a beast among beasts, having set the all-time world record for the raw bench press multiple times, and most recently putting up his best performance with a 355kg/782.6 lbs bench press on February 21, 2021, at the Hybrid Showdown, Miami, Fl.

There was clearly more in his tank as crazy as it sounds and now he’ll be re-attempting an 800 lb bench press of which he failed last year. Although, the misloaded bar and him suffering a minor injury as a result probably played a role.

Anyhow, Maddox recently sat down for a video interview with the one and only Dave Palumbo of RX Muscle. The conversation involved different parts of the former’s life and at one point, Maddox talked about his identity crisis and struggles as a young athlete.

Maddox was a promising young basketball player in high school and mentioned being a lost talent after getting caught up in drugs, girls, and partying.

“I struggled with an identity crisis. Didn’t know who I was, wasn’t confident in who I was.”

So he was willing to do anything for some validation.

“Things that made me feel good, or gave me some kind of notoriety, I gravitated to“.

He explained being an up-and-coming athlete with a lot of hype around him in his Freshmen year, and he partied with the varsity guys a lot.

Getting Kicked Off The Team and Regretting His Life Choices

From there, it became his lifestyle, and eventually, he was kicked off the football team for good and it haunted him for about ten years, especially when his dream was always to play for the NFL.

“Even after I got clean, say I saw someone throwing a football, or driving by the high school to see the football stadium, even watching NFL games on TV, it reminded me of how big of a failure I was, that I basically threw my life down the drain because I wanted to party.”

He also mentioned his father not playing much of a positive role in his life being addicted to alcohol and cocaine which also affected his life path.

Discovering His Gift For The Bench Press

It wasn’t until Maddox went into a drug treatment facility in 2013 that he discovered his bench pressing gift. He mentioned crying out to God and losing the desire to continue the path that would keep him in a bad place.

So at the time, he was working a job and every day after his shift, he’d go to the basement at the facility that had dirt floors and some equipment that was donated and he’d workout.

He didn’t know much about training and did basic stuff like the overhead press, bench press, curls, and rows almost every day.

“It made me feel good, and I got that pump. I felt like I was achieving something, I felt good about myself.”

Maddox said he’d bench 275 for sets and reps but he still didn’t realize how strong he was or how much potential he had. One day someone in the gym bet he could lift all the weight there so he went for it and pressed 505 lbs for three reps.

He said he probably never would have tried the weight if it wasn’t for that instance.

One of the guys showed him videos of other famous men who were powerhouses and he instantly knew he wanted to be like them. And within the same year or year and a half, he achieved a 600 lb bench press.

From there, he was convinced that he needed to start competing. Shortly after, he competed in his first meet in Kentucky and managed to press 625 lbs with a pause. He then had his eye on Kirill Sarychev’s all-time record which he broke in 2019 with a 739.6 lb bench press.

He’s gradually improved upon that record to a current 355kg/782.6 lbs.

Palumbo teased about his lifts looking effortless which is very accurate.

Related: Breaking Bench: What You Need to Know About the Bench Press

He talked about the ESPN, CoreSports event last where he first attempted 800 lbs of which he not only came up short after a bar misload but said he was gypped due to not receiving the payout he was promised. In fact, he lost money on the deal.

But this time around, he’ll be attempting the feat at Wrigley Field and the Chicago Cubs major league baseball team will be sponsoring the event.

He plans to do more than the record and bench press 805 lbs or more, and based on his recent performance, this looks very possible.

Palumbo asked if Maddox thought 900 lbs (raw) could be possible.

His response… “At this point, we don’t know, we don’t know what the potential is“. He says it was never a thought that the body would ever be capable of handling so much weight.

He believes he and his coach Josh Bryant are the perfect recipe for great greatness and he’s not far off. But only time will tell.

Maddox currently weighs 443 lbs at 6’3″ and if any behemoth is going to press 900 lbs it’s probably him, especially since he’ll most likely surpass 800 lbs.

But let’s first break the record at Wrigley Field on June 19 and then they can talk about 900 lbs.