After hitting the gym and using the world's heaviest gold dumbbells, Kali Muscle and Big Boy are asked to leave Gold's Gym Venice, before getting into an altercation with a person outside 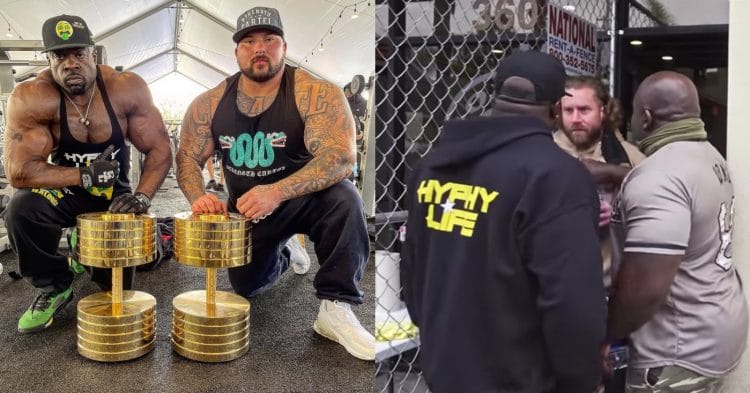 It is no secret that YouTube fitness stars Kali Muscle and Big Boy are intense guys. This was brought to light in a big way recently, after they had some issues with their trip to Gold’s Gym Venice.

With half of a million subscribers for Big Boy and 2.2 million for Kali, there is no denying their place as some of the biggest stars in the fitness industry. They have had several viral moments over the years to garner them each with their own notoriety.

Recently the pair of fitness stars teamed up to hit the iconic Gold’s Gym Venice. Each man brought along their own individual camera crews to film the session for YouTube, and they both had one big goal in mind.

These particular dumbbells are the billed as the heaviest dumbbells made of solid gold. After a warm-up, they hit the novelty dumbbells, as Muscle does two reps of a row, and Big Boy lands a staggering ten reps in his right arm and six on his left.

Then Things Got Ugly

After hitting up these solid gold dumbbells, Kali Muscle and Big Boy bounced around the gym a little more. However then a manager at the gym came over to scold them for not wearing their masks properly.

Things got a bit heated here, as the manager told the pair that he did not know who they were with. Kali took this personally, as he felt disrespected by the fact that this guy did not know who he was.

“How long you been here?” he asked.

“No idea. Do you know how many people come in here?” he replied.

“Where have you been, (expletive) under a rock?” retorted Muscle.

This exchanged prompted the manager to ask Kali Muscle, Big Boy, and their crew to leave. They agreed to, although it was clear that there was serious tension during the situation.

Then Kali Muscle Almost Got In A Fight

As if this was not a crazy enough trip to Gold’s Venice, this was not where it ended for Kali Muscle and Big Boy. They transitioned outside the building, to do a wrap up for the video.

However things got heated when someone walking into the gym walked through the camera frame. This prompted Muscle to confront the guy about it, who did not back down.

After patting Kali on the arm and apologizing, things seemed to heat up more. While the two fist bumped, and were about to go on their way, the man told the YouTuber to chill, which was not well received.

When the man walked away he was still talking, and Muscle said something about that. That resulted in the two getting in each other’s face, before being separated, somewhat calming down, and going about their own business.

“They don’t like Kali around here. Look at him, look at him. That’s what happens when you’re Kali Muscle,” Big Boy jokes.

This was quite the intense session at Gold’s Gym Venice for Kali Muscle and Big Boy. They even joked about how they will not be able to come back there, and it is hard to disagree with that.

What do you think of this whole exchange?