Karlos Nasar already clean & jerked more than anyone in the history of the 89-kilogram weight class at the age of just 18-years-old. 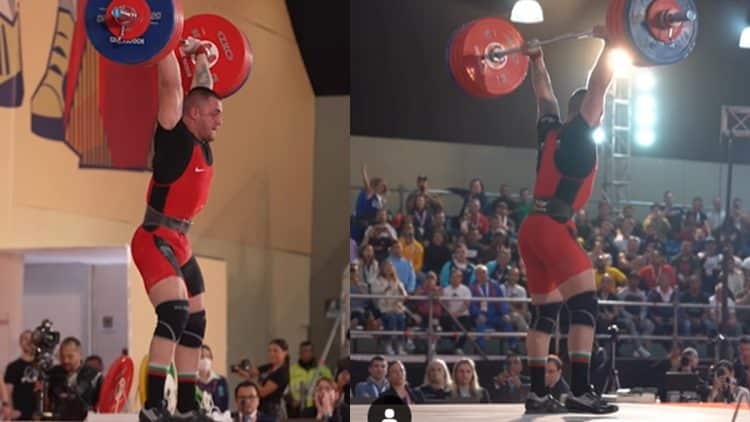 All weightlifting fans had a chance to witness some greatness in the making at the 2022 IWF World Weightlifting Championships, on December 11th, when Karlos Nasar stepped on stage in Bogota, Colombia. Despite being only 18-years-old, Nasar has already amassed a large following due to his groundbreaking lifts. He has lifted some massive weights in the past, but this time was a bit more special. Nasar managed to set a new Senior, as well as a Junior, World Record in the Clean & Jerk event by locking out 220 kilograms (485 pounds) over his head.

Karlos Nasar entered the competition in the 89-kilogram weight class, which has been his go-to in the past year or so. It’s in this weight class that Karlos Nasar managed to set a new Senior World Record, having beaten the previous record by 3 kilograms (6.6 pounds). The last Senior record was in possession of Antonino Pizzolato, as he Clean & Jerked 217 kilograms (478.4 pounds) at the 2022 European Weightlifting Championships. Unfortunately for Antonino, his record stood only for a couple of months.

Regarding the Junior Clean & Jerk World Record, Karlos Nasar further improved the previous record, also in possession of him, by 9 kilograms (19.8 pounds). He set the old record at the 2022 European Weightlifting Championships by Clean & Jerking 211 kilograms (465.2 pounds).

Interestingly, Karlos Nasar attempted a 217-kilogram (478.4-pound) Clean & Jerk for his 2nd attempt and was not successful. He then upped the weight to 220 kilograms (485 pounds) and managed to lock it out.

Karlos Nasar did not perform a Snatch, which means that he was not subject to a Total which could possibly earn him a gold medal. While he did win the Clean & Jerk portion of the contest, Keydomar Vallenilla Sanchez of Venezuela won the 89-kilogram weight class overall. Keydomar finished with a total of 385 kilograms, that is a result of a 175-kilogram (385.8-pound) snatch and a 210-kilogram (463-pound) Clean & Jerk.

Karlos Nasar has accumulated quite a few impressive performances and results at major competitions, with the most notable being: