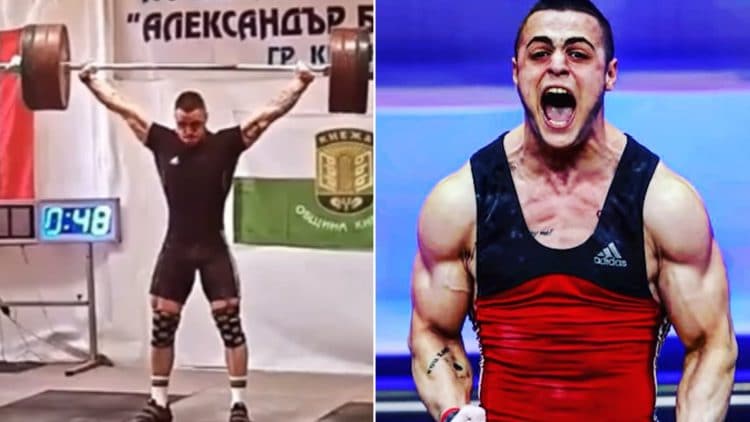 In weightlifting, a sport in which muscle maturity and movement perfection excels, you would think the record holders would be people in their twenties, who are fully developed and had enough time to perfect the movement. That would be until a 17-year-old Karlos Nasar (81 kg), coming from Bulgaria, clean and jerked an impressive weight of 206 kg (454 lbs) in the European Junior Championship, this year in Russia. Karlos claimed one record, but his training footage points toward potential records in snatch and total categories.

Karlos published an Instagram video of him snatching 175 kg (385.8 lbs) in training. For reference, the Junior World Record snatch is 168 kg (370.4 lbs) and the Senior World Record is 175 kg (385.8 lbs), both held by Li Dayin. When we talk about weightlifting, few names usually come to mind, and one of those would be Li Dayin (81 kg – 178.6 lbs). The Chinese weightlifting star earned his fame by claiming all three junior weightlifting records and a senior snatch world record. That is until Karlos broke the clean and jerk world record.

Nasar is also just one kg off the clean and jerk Senior World Record held by two-time Olympic gold medalist  Lü Xiaojun, the record stands at 207 kg (456.4 lbs) and Karlos’s official personal record is 206 kg (454 lbs). The 81 kg (178.6 lbs) division is relatively new but still has been dominated by the Chinese duo. It looks like Karlos could bring some healthy competition.

How has Karlos Nasar just appeared at the top?

The truth is that Karlos has been very dominant on the junior stage of weightlifting for some time now. Some of his major achievements would be:

What is crazy is that according to Karlos, his personal records are as follows:

He also shows how explosive he is on his Instagram account, “Shturi”, where he does a standing vertical jump on a chest-high stack of weights.

You can see the video here:

It looks like Karlos Nasar could be in the realm of Li Dayin and Lü Xiaojun, at least according to him. When he breaks world records in training, it is not that hard to believe him.