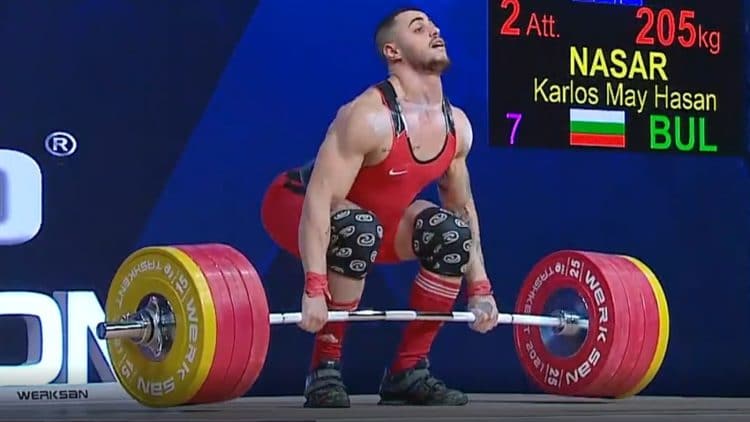 The Bulgarian sensation, Karlos Nasar, is the new International Weightlifting Federation (IWF) world champion in the 81 kg category. He won the 2021 IWF World Championships, which was held from December 7th-17th, 2021, in Tashkent, Uzbekistan. In addition to winning, Karlos managed to break multiple world records, most notable of which is the senior clean and jerk record, previously held by Lu Xiaojun.

Karlos showcased his form two weeks ago when he published a 175 kg (385.8 lbs) snatch. He didn’t snatch that much in the World Championships, but managed to break the Youth World Record Snatch with a lift of 166 kg (365.9 lbs).

The first lift for Karlos was the snatch, in which he took silver with a 166 kg (365.9 lbs), behind a lifter from Moldova, Marin Robu. Despite coming short of the snatch that he posted two weeks ago, Karlos still claimed the Youth World Record snatch.

The second event for Karlos was the clean and jerk, where he dominated the field with a 208 kg (458.6 lbs) lift and broke the World record. To break the senior World record, Karlos had to beat one of the greats, Lu Xiaojun. Karlos is bringing to an end to the domination of the Chinese duo, Lu Xiaojun and Li Dayin, who have been the two top athletes in the 81 kg category for some time now. They didn’t attend the competition because team China decided not to participate due to quarantine and travel concerns.

Karlos is relatively new to the senior weightlifting competitions, but he has had some major success in the Junior category. Bulgaria has a history of making some great athletes in the sport of weightlifting, but Karlos is their first world champion since 2007 and first record holder in many years.

Some of Karlos’s greatest achievements before this competition came at the 2021 European Championships held in Moscow, Russia.

This performance from Karlos Nasar is significant in many ways, he brought some fresh blood to the 81 kg category and put Bulgarian weightlifting back on the map. He is certainly a freak of nature, breaking world records at 17-years-old and does it even in training. If he gets better with the years, then very soon we can expect him to be in a league of his own.