The former two-time Mr. Olympia opened up on myriad of topics including the uniquely 'different' package he's using to dethrone Chris Bumstead. 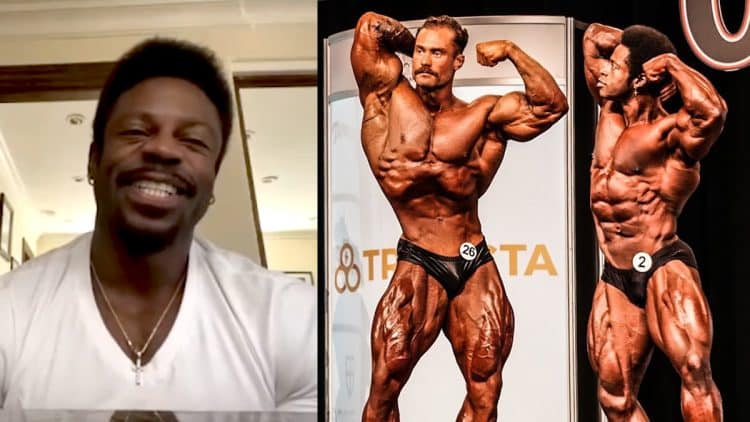 Former two-time Classic Physique Olympia Breon Ansley is plotting his revenge against Chris Bumstead ahead of this year’s Olympia contest. In an interview with Muscular Development, Ansley opened up on weight cap concerns for Classic Physique, moving to 212, and how to defeat ‘CBum’ at the 2022 Olympia this weekend.

In 2017, Ansley reached the top of the sport after winning his first Classic Physique Olympia title. He defended it successfully in 2018 but would ultimately surrender the honor to Canada’s Chris Bumstead at the 2019 Mr. Olympia contest. He finished runner-up at the event and vowed to bring an improved package the next time he got the chance to stand against Bumstead.

Ansley got the opportunity to face Bumstead again in 2020 and 2021 but fell to third place at both Olympia appearances. Nevertheless, Breon committed to his latest off-season and contest prep, showcasing a number of intense training sessions.

As of late, Breon last competed at the 2022 Arnold Classic, where he finished fourth, respectively. The event featured a few breakout stars from the Classic Physique category. By the end of the night, third place finisher Urs Kalecinski, runner-up Ramon Rocha Queiroz, and champion Terrence Ruffin surpassed ‘The Black Swan’ on the scorecards.

Ahead of his 2022 Olympia showing this weekend, Classic Physique contender Breon Ansley talked about his future aspirations and game plan for dethroning the sitting champion, Chris Bumstead.

Speaking with Ron Harris, Ansley revealed his plan is still to compete one final time in Classic Physique this year before testing the waters in 212 Bodybuilding.

“Yeah, that’s still the plan [to switch to 212 Bodybuilding]. As long as they keep the weight caps the same, then that is the plan. I definitely need to after this year finish strong with the weight caps that I’ve been limited to for the last four years. I can’t stay in the same, I can’t stay within these same parameters and limitations for another year.

As long as they make the weight caps the same — I will be moving on to different pastures, greener pastures I guess if you want to say. Either way,” says Breon Ansley. “Yeah. I don’t know how [my weight cap is] not at 185 [pounds]. But we’ve been given 10 pounds, it was 175 okay. It was my lowest that I had to be at Ron. And somehow someway I’ve only been alotted five [pounds].”

Ansley revealed that he’s taller than Terrence Ruffin but is forced to abide by the same weight cap restriction. He cited this as a contributing factor for moving out of the Classic Physique division next year.

“I’m taller than Terrence you know what I mean, and we’re at the same weight cap. I don’t know how that is. It’s a mystery but hey, nevertheless, we’ve been able to hold our own for these years. We intend to even bring something different and a different look to the stage this year because I’ve mentioned to you before, it’s not about getting to the weight cap, it’s how we get there this year.”

“We just want to finish up with an absolute banging look and look our very best. Like I said, doing that, now we figured out how we have to get to the weight cap and how we have to sustain this thing as opposed to just getting there or scrambling to get there,” says Ansley.

He said that he would still make the switch even if he won this year’s Classic Physique title.

“Yeah, I really would. I still would because the challenge wouldn’t be there still having to come back to the same weight cap. There wouldn’t be a challenge there and it would be time to move on to a different challenge and try to get one in the 212 class.”

Ansley Talks 2022 Olympia Having too Many Classic Physique Competitors

According to Breon, this year’s Olympia will feature too many Classic Physique competitors. He and Ruffin agree that there’s no way judges can give all athletes a fair look given the number of participants.

“I heard from — I got good feedback from Terrence [Ruffin]. He does agree that the numbers are too high [qualified athletes for 2022 Classic Physique Olympia] and there will be some adjustments made for next year or for the future because he’s in an agreement that the numbers are too high and that it doesn’t lend for a great elite great top best of the best in the world Olympia.”

Before ending the conversation, Ansley reflected on some of the young rising talent in Classic Physique like Urs Kalecinski, Terrence Ruffin, and Ramon Rocha Queiroz.

Breon Ansley hopes to make history by becoming the only athlete other than Jay Cutler to regain an Olympia title that was lost. When discussing this year’s Olympia Classic lineup, bodybuilding legend Phil Heath suggested the only way to dethrone Chris Bumstead would be with a full back, conditioning, flow, and proper presentation.

This weekend, the best in the world will meet in Las Vegas, Nevada, where 11 Olympia champions will be crowned. Even if Ansley finds success at 2022 Mr. Olympia, he’s reaffirmed his commitment to trying out the 212 division next year.